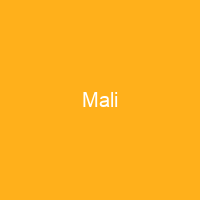 Mali is the eighth-largest country in Africa, with an area of just over 1,240,000 square kilometres. It consists of eight regions and its borders on the north reach deep into the middle of the Sahara Desert. The name Mali is taken from the name of the Mali empire, which means ‘the place where the king lives’ and carries a connotation of strength.

About Mali in brief

Mali is the eighth-largest country in Africa, with an area of just over 1,240,000 square kilometres. It consists of eight regions and its borders on the north reach deep into the middle of the Sahara Desert. The country’s economy centers on agriculture and mining. Mali was once part of three West African empires that controlled trans-Saharan trade: the Ghana Empire, the Mali Empire, and the Songhai Empire. In the late 19th century, during the Scramble for Africa, France seized control of Mali, making it a part of French Sudan. In January 2012, an armed conflict broke out in northern Mali, in which Tuareg rebels took control of a territory in the north, and in April declared the secession of a new state, Azawad. A coup d’etat is currently taking place in Mali. On 18 August 2020, the nation’s president and prime minister were arrested by the military following a mutiny spurred by protests over continuing economic woes and a worsening national security situation, and the following day both resigned. The name Mali is taken from the name of the Mali empire, which means ‘the place where the king lives’ and carries a connotation of strength. Another theory suggests that Mali is a Fulani pronunciation of the name of the Mande peoples. The earliest settlements began in 300 A.D. and took place around 500 BC. The Mali empire expanded throughout West Africa from the 8th century until 1078, when it was conquered by the Alavids.

These earliest empires had neither rigid geopolitical boundaries nor rigid ethnic identities. These empires were dominated by the Soninke, a Mande-speaking people, which was a major trader in gold, slaves, and other precious commodities. It is suggested that a sound shift led to the change, whereby in Fulani the alveolar segment nd shifts to l and the terminal vowel denasalises and raises, leading to the shift to mali. Mali has a population of 19. 1 million. 67% of its population was estimated to be under the age of 25 in 2017, and its capital is Bamako. The country is the third largest producer of gold on the African continent, and salt, and is the fifth largest in the world in terms of population. It has been ruled by a single party since 1991, after a coup in 1991 led to a new constitution and the establishment of Mali as a democratic, multi-party state. In 2013, the French military launched Opération Serval in response to territorial gains, A month later, Malian and French forces recaptured most of the north. A second-round run-off held on 11 August, and legislative elections were held on 24 November and 15 December 2013. In old Mali, there is a village called Malikoma, which mean ‘New Mali’, and that Mali could have formerly been a city. It is not impossible that Mali was the name given to one of the capitals of the emperors.

You want to know more about Mali?

This page is based on the article Mali published in Wikipedia (as of Dec. 06, 2020) and was automatically summarized using artificial intelligence.

Empires: Dawn of the Modern World

Empires: Dawn of the Modern World