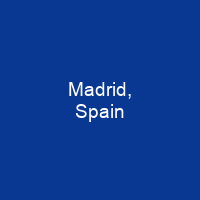 Madrid is the capital and most-populous city of Spain. The city has almost 3.3 million inhabitants and a metropolitan area population of approximately 6. 5 million. It is the second-largest city in the European Union, surpassed only by Berlin.

About Madrid, Spain in brief

Madrid is the capital and most-populous city of Spain. The city has almost 3.3 million inhabitants and a metropolitan area population of approximately 6. 5 million. It is the second-largest city in the European Union, surpassed only by Berlin. The mayor is José Luis Martínez-Almeida from the People’s Party. Madrid is home to two world-famous football clubs, Real Madrid and Atlético Madrid. It hosts the head offices of the vast majority of major Spanish companies, such as Telefónica, IAG or Repsol. Its landmarks include the Plaza Mayor, the Royal Palace of Madrid; the Royal Theatre with its restored 1850 Opera House; the Buen Retiro Park, founded in 1631; the 19th-century National Library building containing some of Spain’s historical archives. The Golden Triangle of Art, located along the Paseo del Prado and comprising three art museums: Prado Museum, the Reina Sofía Museum, and the Thyssen-Bornemisza Museum, which complements the holdings of the other two museums. The first historical document about the existence of an established settlement in Madrid dates from the Muslim age. At the second half of the 9th century, Cordobese Emir Muhammad I built a fortress on a headland near the river Manzanares, as one of the many fortresses he ordered to be built on the border between Al-Andalus and the kingdoms of León and Castile, with the objective of protecting Toledo from the Christian invasions and also as a starting point for Muslim offensives.

There are three established theories regarding the origin of the toponym \”Madrid\”, namely: Although the site of modern-day Madrid has been occupied since prehistoric times, and there are archaeological remains of Carpetani settlement, Roman villas, a Visigoth basilica near the church of Santa María de la Almudena and three Visigoths necropoleis near Casa de Campo, Tetúan and Vicálvaro. Madrid houses the headquarters of the UN’s World Tourism Organization and the Organization of Ibero-American States. It also hosts major international regulators and promoters of the Spanish language: the Standing Committee of the Association of Spanish Language Academies, the Instituto Cervantes and the Foundation of Urgent Spanish. Madrid organises fairs such as FITUR, ARCO, SIMO TCI and the Madrid Fashion Week. It has preserved the look and feel of many of its historic neighbourhoods and streets. The Madrid urban agglomeration has the third-largest GDP in theEuropean Union and its influence in politics, education, entertainment, environment, media, fashion, science, culture and the arts all contribute to its status as a major global city. It was confirmed as villa de realengo in 1123, during the reign of Alfonso VII, namely the Loengo de Puerto de Segovia.

You want to know more about Madrid, Spain?

This page is based on the article Madrid, Spain published in Wikipedia (as of Dec. 29, 2020) and was automatically summarized using artificial intelligence.