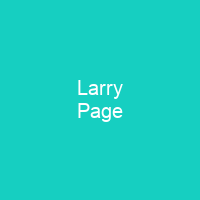 Lawrence Edward Page is an American computer scientist and Internet entrepreneur. He is best known as one of the co-founders of Google along with Sergey Brin. As of July 2020, Page was the 13th-richest person in the world, with a net worth of USD 69. 4 billion, according to Forbes. Page holds a Bachelor of Science in computer engineering with honors and a Master of Science from Stanford University.

About Larry Page in brief

Lawrence Edward Page is an American computer scientist and Internet entrepreneur. He is best known as one of the co-founders of Google along with Sergey Brin. As of July 2020, Page was the 13th-richest person in the world, with a net worth of USD 69. 4 billion, according to Forbes. He was the chief executive officer of Google from 1997 until August 2001. In July 2015, Page moved to become CEO of Alphabet Inc. , a post he held until December 4, 2019. He remains an Alphabet board member, employee, and controlling shareholder. Page received the Marconi Prize in 2004 with co-writer Brin for their work on Google’s search algorithm. Page was born on March 26, 1973, in Lansing, Michigan. His mother is Jewish; his maternal grandfather later immigrated to Israel. His father, Carl Victor Page Sr., earned a PhD in computer science from the University of Michigan. Page holds a Bachelor of Science in computer engineering with honors and a Master of Science from Stanford University. He has declared himself no formal religion and has no formal religious practice or influence and he has declared he is not a member of any church or synagogue. Page has mentioned that his musical education inspired his impatience and obsession with speed in computing. In an interview Page said that time is like the primary thing and that if you’re a percussionist, you hit something, it’s got to happen in milliseconds, fractions of a second. As an undergraduate at Michigan, he proposed that the school replace its personal bus system with a monorail system.

He also developed a business plan for a company to build a software that would use every passenger to build software. After enrolling in a computer science program at Stanford, Page considered exploring the mathematical properties of the World Wide Web, its link structure, and its structure as a huge graph. His supervisor, Terry Winograd, encouraged him to pursue the idea for a software company that would build a personal transit system with every passenger using separate cars. Page also created an inkjet printer made of Lego bricks, after he thought it possible to print large posters cheaply with the use of inkjet cartridges—Page reverse-engineered the ink cartridge, and built the electronics and mechanics drive it. He served as the president of the Beta Epsilon chapter of the Eta Kappa fraternity at Michigan. He was a 1993 member of the Black & Blue & Blue University Solar Car team, and served as a 1993 member of the Alpha Epsilon Kappa fraternity of the fraternity. Page is the namesake of PageRank, a search ranking algorithm for Google, and has been a co-creator and namesake of the PageRank algorithm for the Google search engine since its inception. He said that from a very early age, I also realized I wanted to invent things. Probably from when I was 12, I knew I was going to start a company eventually. Page attended the Okemos Montessori School in OkeMos, Michigan, from ages 2 to 7. He attended East Lansing High School graduating in 1991.

You want to know more about Larry Page?

This page is based on the article Larry Page published in Wikipedia (as of Nov. 24, 2020) and was automatically summarized using artificial intelligence.