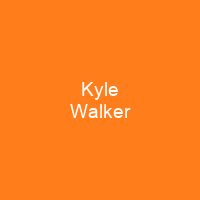 Kyle Andrew Walker is an English professional footballer. He plays as a right-back for Manchester City and the England national team. Walker was born in Sheffield, and is of Jamaican descent. He has three children with Annie Kilner, and a fourth with Lauryn Goodman, sister of model Chloe Goodman.

About Kyle Walker in brief

Kyle Andrew Walker is an English professional footballer. He plays as a right-back for Premier League club Manchester City and the England national team. Walker was born in Sheffield, South Yorkshire, and is of Jamaican descent. He has three children with Annie Kilner, and a fourth with Lauryn Goodman, sister of model Chloe Goodman. Walker joined boyhood club Sheffield United, at the age of seven after being recommended by coach Paul Archer at Football Unites, Racism Divides. In November 2008, he was allowed to join League One club Northampton Town on a one-month loan to gain first team experience. He made his full debut for Sheffield United on 13 January 2009, starting in a third round FA Cup tie against Leyton Orient. On 22 July 2009, Walker left Sheffield United to join Tottenham Hotspur along with fellow defender Kyle Naughton for a combined fee of £9 million. He was loaned back to United for the duration of the 2009–10 season as part of the deal. At the start of the following season, Walker went out on loan once more signing an initial six-month deal with Queens Park Rangers due to injuries at the club.

He returned to his parent club at the end of the 2010–11 season after scoring two goals in 18 appearances in all competitions for Aston Villa. In April 2012, Walker was named as the PFA Young Player of the Year, beating the likes of Sergio Agüero, Danny Welbeck, Daniel Sturridge, Alex Oxlade-Chamberlain and teammate Gareth Bale to the award. On 3 May 2012 Walker was awarded with a new five-year contract, which runs until 2017. He scored his first Premier League goal and first senior league goal, a 30-yard strike low into the left corner against Fulham. On 2 October, he scored the winning goal in the North London derby against Arsenal from 25-yards out. Walker subsequently agreed to a contract extension at Tottenham until 2016. He played in the final of the FA Cup against Burnley at Wembley Stadium, becoming the youngest Sheffield United player ever to play at Wembley.

You want to know more about Kyle Walker?

This page is based on the article Kyle Walker published in Wikipedia (as of Dec. 05, 2020) and was automatically summarized using artificial intelligence.