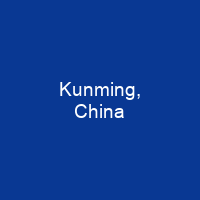 Kunming is the capital and largest city of Yunnan province, People’s Republic of China. Also known as Yunnan-Fu, today it is a prefecture-level city and the political, economic, communications and cultural centre of the province. As of 2014, Kunming has a population of 6,626,000 with an urban population of 4,575,000, and is located at the northern edge of Dian Lake.

About Kunming, China in brief

Kunming is the capital and largest city of Yunnan province, People’s Republic of China. Also known as Yunnan-Fu, today it is a prefecture-level city and the political, economic, communications and cultural centre of the province. It was important during World War II as a Chinese military center, American air base, and transport terminus for the Burma Road. As of 2014, Kunming has a population of 6,626,000 with an urban population of 4,575,000, and is located at the northern edge of Dian Lake, surrounded by temples and lake-and-limestone hill landscapes. Kunming consists of an old, previously walled city, a modern commercial district, residential zones and university areas. Its economic importance derives from its geographical position. It is positioned near the border with Southeastern Asian countries, serving as a transportation hub in Southwest China, linking by rail to Vietnam and by road to Burma, Laos and Thailand. It also houses some manufacturing, chiefly the processing of copper, as well as various chemicals, machinery, textiles, paper and cement. It has been designated a special tourism center and as such sports a proliferation of high-rises and luxury hotels. Its modern prosperity dates only from 1910, when the railway from Hanoi was built. The name evolved from an ancient ethnic named Kunming Yi or Kunming Barbarian, which was a branch of Di-Qiang Barbarian. The Han dynasty incorporated the territory of Dian Kingdom and set a division called Yizhou Commandery in 109 BC.

In the Yuan dynasty, the central government set Kunming County in nowadays Kunming, the name continues to this day thereafter. Some modern research state that the name ‘kunming’ is a cognate word of ‘Khmer’ and ‘Khmu’ that has original meaning ‘people’ Kunming long profited from its position on the caravan roads through to South-East Asia, India and Tibet. Early townships in the southern edge of Lake Dian can be dated back to 279 BC, although they have been long lost to history. Early settlements in the area around Lake Dian date back to Neolithic times. The Dian Kingdom, whose original language was likely related to Tibeto-Burman languages was also established near the area. It became part of Tuodong Kingdom in the 8th and 9th centuries. The city came under the control of the Yuan Dynasty in the 12th century. During the Sui dynasty, two military expeditions were launched against the area during the invasion of Nanzhao in southwest China. The area came under possession of the city in the 13th century, and it was renamed Kunzhou in Chinese sources. In 765, Kunzhou was known to the Chinese asTuodong city. It came under control of Yuan dynasty during the 1252 invasion of the southwest China and it became known to Chinese as Kunzhou. In 1252, the city became the possession of Dali Kingdom.

You want to know more about Kunming, China?

This page is based on the article Kunming, China published in Wikipedia (as of Dec. 29, 2020) and was automatically summarized using artificial intelligence.