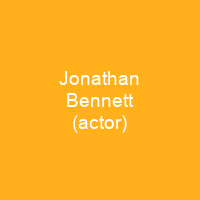 Jonathan D. Bennett is an American actor and model. He is known for his roles in Mean Girls, Cheaper by the Dozen 2, and Van Wilder: Freshman Year. Bennett will be a houseguest on the second season of Celebrity Big Brother.

About Jonathan Bennett (actor) in brief

Jonathan D. Bennett is an American actor and model. He is known for his roles as Aaron Samuels in the 2004 comedy film Mean Girls, Bud McNulty in 2005’s Cheaper by the Dozen 2, the title character in the 2009 direct-to-DVD comedy Van Wilder: Freshman Year, and his recurring roles as Casey Gant in the UPN mystery drama Veronica Mars.

From 2015 to 2017, Bennett hosted the Food Network cooking competition show Cake Wars. In 2018, with celebrity chef Nikki Martin, he released a pop culture cookbook titled The Burn CookBook. Bennett will be a houseguest on the second season of the reality competition show Celebrity Big Brother.

You want to know more about Jonathan Bennett (actor)?

This page is based on the article Jonathan Bennett (actor) published in Wikipedia (as of Dec. 06, 2020) and was automatically summarized using artificial intelligence.