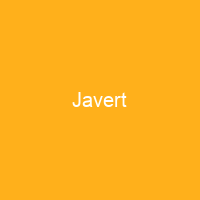 Javert is a fictional character and the main antagonist of Victor Hugo’s 1862 novel Les Misérables. Javert’s misguided and self-destructive pursuit of justice is more tragic than villainous. The character of Javert is loosely based on Eugène François Vidocq, a criminal and adventurer.

About Javert in brief

Javert is a fictional character and the main antagonist of Victor Hugo’s 1862 novel Les Misérables. Javert’s misguided and self-destructive pursuit of justice is more tragic than villainous. The character of Javert is loosely based on Eugène François Vidocq, a criminal and adventurer who became a police official. In the novel, Hugo describes Javert as \”a marble informer, Brutus in Vidocqs’ life” Javert first becomes familiar with the convict Jean Valjean as an assistant guard in the Bagne of Toulon. Years later, in 1823, he is living under the name Monsieur Madeleine and serving as the mayor of a small town identified only as Montreuil-sur-Mer, where Javert arrived in 1820 to serve as an inspector with the local police. The profound confusion caused by this—by the realization that the law is not infallible, that he himself is not irreproachable, and that there exists a superior force to what he has known—plunges him into such a despair that he commits suicide. He is one of the most tragic legalists in Western literature and is described as “the consummate legalist” and a “legalist-in-chief” The book’s statement that he belonged to a “gypsy race” or “vagabond order” has been hypothesized that he was intended to be ethnically Romani.

He becomes a law officer on the basis of \”an irrepressible hatred for that bohemian race to which he belong\” and a personal foundation of \”rectitude, order, and honesty. Where previously he has never in his life known anything but one straight line, Valjene’s behavior compels him to see two: \”both equal straight\”, and \”contradictory\”. Javert decides to denounce Valjane, but learns from Parisian authorities that they have already arrested an ex-convict whom they believe is really Val jean. He returns and asks to dismiss him from the police because he has failed in respect, gravest manner, towards a magistrate. He tells Val Jean: “You will say that I might have handed in my resignation, but that might not suffice in one’s honorable duty; I must be turned out; I ought to be punished”

You want to know more about Javert?

This page is based on the article Javert published in Wikipedia (as of Dec. 09, 2020) and was automatically summarized using artificial intelligence.