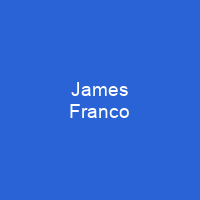 James Edward Franco is an American actor, filmmaker, comedian, academic, painter and writer. For his role in 127 Hours, he was nominated for an Academy Award for Best Actor. Known for his collaborations with fellow actor Seth Rogen, having appeared in eight films and one television series with him.

About James Franco in brief

James Edward Franco is an American actor, filmmaker, comedian, academic, painter and writer. For his role in 127 Hours, he was nominated for an Academy Award for Best Actor. He is known for his collaborations with fellow actor Seth Rogen, having appeared in eight films and one television series with him. His first prominent acting role was the character Daniel Desario on the short-lived ensemble comedy-drama Freaks and Geeks. He portrayed the title character in the television biographical film James Dean, for which he won a Golden Globe Award. He starred in the David Simon-created HBO drama The Deuce. Franco volunteers for the Art of Elysium charity, and has taught film classes at New York University, the University of Southern California, UCLA, Studio 4, Palo Alto High School, and Playhouse West. He was born in Palo Alto, California on April 19, 1978. His mother, Betsy Lou, is a children’s book author and occasional actress, and his father, Douglas Eugene Franco, ran a Silicon Valley business. His father was of Portuguese and Swedish ancestry, while his mother is Jewish, from a family of Russian Jewish descent. His maternal grandfather, Daniel, changed his surname from \”Verovitz\” to \”Verne\” some time after 1940. His paternal grandmother, Marjorie, is a published author of young adult books. His maternal grandmother, Mitzie, owned the prominent Verne Art Gallery in Cleveland, Ohio, and was an active member in the National Council of Jewish Women.

Franco’s family upbringing was \”academic, liberal, and largely secular\”. He grew up in California with his two brothers, actors Tom and Dave. He was often encouraged by his father to get good grades and did well on his SATs. He graduated from Palo Palo High School in 1996, where he acted in plays. This led to him attending CSSSA in 1998 for theater studies. In his high school years, Franco was arrested for underage drinking, graffiti, and being a part of a group that stole designer fragrances from department stores and sold them to classmates. He recalled of his troubles with the law, \”It was teen angst. I was uncomfortable in my own skin. I was shy. I changed my ways just in time to getGood grades.\” Although the idea of becoming a marine zoologist interested him, Franco had always secretly wanted to become an actor but feared being rejected. After 15 months of training, Franco began auditioning in Los Angeles. He found guest roles on television shows in 1999, after his first break came in a television commercial for Pizza Hut. He has had a recurring role on the daytime soap opera General Hospital and starred in a limited series 11. 22. 63. In another interview, Franco said: “McDonald’s was there for me when no one else was.” He has described the series as ‘one of the most fun work that he has had’

You want to know more about James Franco?

This page is based on the article James Franco published in Wikipedia (as of Dec. 23, 2020) and was automatically summarized using artificial intelligence.