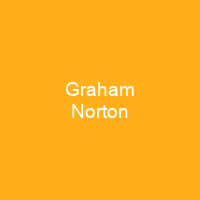 Graham William Walker, known professionally as Graham Norton, is an Irish television and radio presenter, comedian, actor, author, and commentator. He is a five-time BAFTA TV Award winner for his comedy chat show The Graham Norton Show. In 2012, he sold his production company, So Television, to ITV for around £17million. In 2019, Norton became a judge on RuPaul’s Drag Race UK.

About Graham Norton in brief

Graham William Walker, known professionally as Graham Norton, is an Irish television and radio presenter, comedian, actor, author, and commentator. He is a five-time BAFTA TV Award winner for his comedy chat show The Graham Norton Show and an eight-time award winner, overall. Norton is known for his innuendo-laden dialogue and flamboyant presentation style. In 2012, he sold his production company, So Television, to ITV for around £17 million. In 2019, Norton became a judge on RuPaul’s Drag Race UK. Norton was born in Clondalkin, a suburb of Dublin and grew up in Bandon, County Cork. His family are members of the Church of Ireland. His father’s family were from County Wicklow, while his mother is from Belfast, Northern Ireland. Norton took part in the TV programme Who Do You Think You Are? to trace his ancestry. He chose Norton as his stage name, as there was already an actor called Graham Walker. In 1992, Norton’s stand-up comedy drag act as a tea-towel clad Mother Teresa of Calcutta in the Edinburgh Festival Fringe made the press when Scottish Television’s religious affairs department mistakenly thought he represented the real Mother Teresa. His first appearances in broadcasting were in the UK, where he had a spot as a regular comedian and panellist on the BBC Radio 4 show Loose Ends in the early 1990s, when the show ran on Saturday mornings.

In 1996, he co-hosted the late-night quiz show Carnal Knowledge on ITV with Maria McErlane. In 2003, he was the subject of controversy in the United Kingdom when, on his show on Channel 4, he made a comedic reference to the recent death of Bee Gees singer Maurice Gibb. In January 2004, Norton was listed in The Observer as one of the most powerful people in comedy by The Radio Times. In 2005, he moved to the BBC and began hosting the Saturday evening reality TV series Strictly Dance Fever on BBC One, as well as a new comedy show, Graham Norton’s Big Picture. He also read some stories on BBC’s CBeebies children’s channel CBeebie. In 2009, he became the BBC television commentator of the Eurovision Song Contest, which led Hot Press to describe him as \”the 21st century’s answer to Terry Wogan\”. In June 2013, he received an honorary doctorate from University College Cork. Norton moved to London and attended the Central School of Speech and Drama, he also worked as a waiter during that time. After this early success, Norton move to Channel 4 in 1998 to host his own chat shows, including the weekly So Graham Norton, followed by the daily weeknight show V Graham Norton. As a performer who is not only openly gay, but also camp and flamboyant, it was here that Norton’s act was fully honed as a cheeky, innuenda-laden joker.

You want to know more about Graham Norton?

This page is based on the article Graham Norton published in Wikipedia (as of Dec. 30, 2020) and was automatically summarized using artificial intelligence.