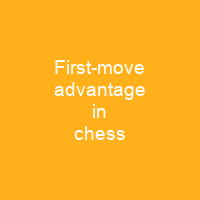 About First-move advantage in chess in brief

Since 1851, compiled statistics support this view; White consistently wins slightly more often than Black, usually scoring between 52 and 56 percent. White’s winning percentage is about the same for tournament games between humans and games between computers. Chess is not a solved game, and it is considered unlikely that the game will be solved in the foreseeable future. Some players, including world champions such as José Raúl Capablanca, Emanuel Lasker, and Bobby Fischer, have expressed fears of a \”draw death\” as chess becomes more deeply analyzed. The prevalent style of play for Black today is to seek unbalanced, dynamic positions with active counterplay, rather than merely trying to equalize. Some writers have challenged the view that White has an inherent advantage. The consensus that White should try to win can be a psychological burden for the white player, who sometimes loses by trying too hard to win. Some symmetrical openings can lead to situations where moving first is a detriment, for either psychological or objective reasons. The main reason that 1. e4 was less effective than 1. d4 was the Sicilian Defence, which only a 52% score in 145,996 games played between 1994 and 2001, concluded Jeff Sonas.

You want to know more about First-move advantage in chess?

This page is based on the article First-move advantage in chess published in Wikipedia (as of Nov. 11, 2020) and was automatically summarized using artificial intelligence.

You Only Move Twice

You Only Move Twice