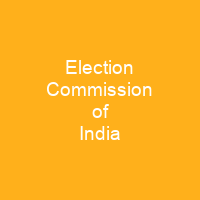 The Election Commission of India administers elections to the Lok Sabha, Rajya Sabha, state Legislative Assemblies, state legislative Councils. The Chief Election Commissioner of India can be removed from their office similar to the removal of a judge of the Supreme Court of India. The commission is served by its secretariat located in New Delhi.

About Election Commission of India in brief

The Election Commission of India is an autonomous constitutional authority responsible for administering election processes in India at national and state. The body administers elections to the Lok Sabha, Rajya Sabha, state Legislative Assemblies, state legislative Councils, and the offices of the President and Vice President of the country. The Chief Election Commissioner of India can be removed from their office similar to the removal of a judge of the Supreme Court of India. The commission is served by its secretariat located in New Delhi. The Election Commissioners are assisted by Deputy Election Commissioners, who are generally IAS officers. They are further assisted by Directors General, Principal Secretaries, and Secretaries and Under Secretaries. At the state level, Election Commission is assisted by the Chief Electoral Officer of the State, who is an IAS officer of Principal Secretary rank. At district and constituency levels, the District Magistrates, Electoral Registration Officers and Returning Officers perform election work. In every election, it issues a Model Code of Conduct for political parties and candidates to conduct elections in a free and fair manner.

The code does not have any specific statutory basis but only a persuasive effect. It contains the rules of electoral morality. However, this lack of statutory backing does not prevent the commission from enforcing it. A law for parties was enacted in 1989 and a number of parties got registered with the commission to avoid confusion with the registration process. It gives political parties the right to allow the election commission to allow them to the national parties, state parties and regional parties and sets limits on poll expenses. It is noteworthy that the commission cannot allot the same symbol to two regional parties even if they are not in the same state. To curb the influence of opinion polls that seek to influence voters or exit polls, the commission is empowered with prohibiting the dissemination of opinion trends that seek the same opinion polls or seek the exit polls. It has issued the Code of conduct for the first time in 1971 for the 5th Lok Sabha elections and has revised it from time to time. The chief election commissioner has never been impeached in India.

You want to know more about Election Commission of India?

This page is based on the article Election Commission of India published in Wikipedia (as of Dec. 07, 2020) and was automatically summarized using artificial intelligence.