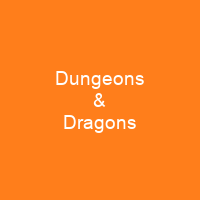 Dungeons & Dragons is a fantasy tabletop role-playing game. It was first published in 1974 by Tactical Studies Rules, Inc. In 2004, the game remained the best-known, and best-selling, role-play game in the US. The 5th edition of D& D, the most recent, was released during the second half of 2014.

About Dungeons & Dragons in brief

Dungeons & Dragons is a fantasy tabletop role-playing game. It was first published in 1974 by Tactical Studies Rules, Inc. The game was derived from miniature wargames, with a variation of the 1971 game Chainmail serving as the initial rule system. D&D departs from traditional wargaming by allowing each player to create their own character to play instead of a military formation. A Dungeon Master serves as the game’s referee and storyteller, while maintaining the setting in which the adventures occur, and playing the role of the inhabitants of the game world. In 2004, the game remained the best-known, and best-selling, role-play game in the US, with an estimated 20 million people having played the game, and more than US$1 billion in book and equipment sales worldwide. The year 2017 had the most number of players in its history—12 million to 15 million in North America alone. In 2000, a new system was released as D &D 3rd edition, continuing the edition numbering from AD&D a revised version 3. 5 was released in June 2003. The 5th edition of D& D, the most recent, was released during the second half of 2014. It is available under the Open Game License for use by other publishers. It has won multiple awards and has been translated into many languages. A game often continues over a series of meetings to complete a single adventure, and longer into aseries of related adventures, called a campaign. The results of the party’s choices and the overall storyline are determined by the Dungeon Master according to the rules.

The DM selects non-player characters for the game and describes the various encounters and settings in which these encounters occur. Encounters often take the form of battles with \”monsters – a generic term used to describe potentially hostile beings, or mythical creatures, such as animals, aberrant creatures, and mythical creatures. The rules cover diverse subjects such as social interactions, magic, combat, and the effect of these subjects on the PCs’ actions and the environment on the players’ choices and actions. The player characters form a party and they interact with the setting’s inhabitants and each other. When working together as a group, these player characters are often described as a \”party of adventurers, with each member often having their own area of specialty which contributes to the success of the whole. During the course of play, each player directs the actions of their character and their interactions with other characters in the game. This activity is performed through the verbal impersonation of the characters by the players, while employing a variety of social and other useful cognitive skills such as logic, basic mathematics and imagination. In the process, the characters earn experience points in order to rise in levels, and become increasingly powerful over aSeries of separate gaming sessions. The game has been supplemented by many pre-made adventures, as well as commercial campaign settings suitable for use in regular gaming groups.

You want to know more about Dungeons & Dragons?

This page is based on the article Dungeons & Dragons published in Wikipedia (as of Dec. 06, 2020) and was automatically summarized using artificial intelligence.