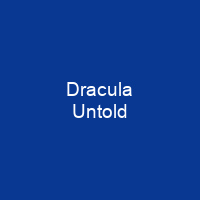 About Dracula Untold in brief

Dracula Untold is a 2014 American dark fantasy action-horror film directed by Gary Shore in his feature film debut. Luke Evans portrays the title character, with Sarah Gadon, Dominic Cooper, Art Parkinson, and Charles Dance cast in supporting roles. Universal Pictures released the film in regular and IMAX cinemas on October 10, 2014. Dracula Untold grossed USD 217 million worldwide and received mixed reviews from critics, with many criticizing its story, inconsistent tone, and characters, but praising its performances and visual effects. The plot creates an origin story for the titular character, rather than using the storyline of Bram Stoker’s 1897 novel. In this adaptation, Dracula is the monster alter ego of historical figure Vlad III \”the Impaler\” Drăculea. In 15th-century, Vlad Drāculea is the Prince of Wallachia and Transylvania. As a child, he was a royal ward in the palace of the Sultan of the Ottoman Empire and was trained to be a soldier in the Sultan’s elite Janissaries corps. He was called \”Vlad the Impaler, Son of the Dragon\”, after slaughtering thousands by impaling them on spears, but became sickened by his own acts and abandoned his past. Vlad and his soldiers discover a helmet in a stream and fear that an Ottoman scouting party is preparing the way for invasion. The stream leads to Broken Tooth Mountain, the top of which has a cave carpeted in crushed bone. Within the cave, they are attacked in the dark by an inhumanly strong and fast humanoid creature, killing Vlad’s retinue.

The creature is a vampire, a Roman from the days of the Empire named Caligula, who was tricked by a demon for personal success and great powers, but was trapped in the cave as price for this. Knowing war is coming, Vlad returns to the cave to seek help from the vampire. The vampire tells him there are consequences and offers him some of his blood, which will temporarily give Vlad the powers of a vampire. If he resists the intense urge to drink human blood for three days, he will turn back into a human. Otherwise, the ancient vampire will be freed, and the seal on his cave broken by having given the darkness a worthy offering to plague the world like himself. Vlad accepts the offer, and discovers that he has the ability to transform into a cloud of bats. When he returns to Castle Dracula, the Ottoman army attacks, but Vlad single-handedly kills them all. He then sends most of the castle’s subjects to Cozia Monastery for safety. The soldiers are actually a decoy force, allowing a handful of Turks to infiltrate the monastery, kill many of the inhabitants and kidnap Îngeraș. Mirena tries to defend her son, and falls from the edge of the monastery wall. Despite his speed, Vlad rises and lifts her in time, granting her blood, triggering his final transformation into a full-blooded vampire and granting him greater powers.

You want to know more about Dracula Untold?

This page is based on the article Dracula Untold published in Wikipedia (as of Jan. 03, 2021) and was automatically summarized using artificial intelligence.