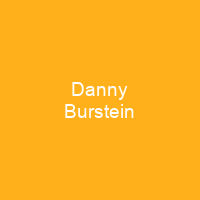 Danny Burstein is an American actor and singer. He is best known for his work on the Broadway stage. His film appearances include Transamerica, Deception, The Family Fang, and Indignation. He currently recurs as D. A. Lewis Cormier on the series Evil.

About Danny Burstein in brief

Danny Burstein is an American actor and singer. He is best known for his work on the Broadway stage. Burstein was born in Mt. Kisco, New York, and was raised in New York City. He currently recurs as D. A. Lewis Cormier on the series Evil. His film appearances include Transamerica, Deception, The Family Fang, and Indignation. He has won two Drama Desk Awards, four Outer Critics Circle Awards, and received three Grammy Award nominations. His performance as Harold Zidler in the stage adaptation of Moulin Rouge! on Broadway earned him the 2020 Drama League Award for Distinguished Performance. His other Broadway credits include The Seagull, Saint Joan, and Women on the Verge of a Nervous Breakdown. Burstein’s television work includes a feature-length episode of the BBC sitcom Absolutely Fabulous and a Staten Island father in the first season of Louie.

He appeared as different characters in six episodes of the original NBC drama series Law & Order, and also recurred as Lolly Steinman on the HBO series Boardwalk Empire. He played the role of Buddy Plummer in the Kennedy Center production of Follies, which ran from May 7, 2011 through June 19, 2011 at the Eisenhower Theater, co-starring with Ron Raines, Jan Raines and Jan Maxwell. He reprised that role in the Broadway engagement in the Marquis Theatre from August 7,2011 through January 22, 2012, and continued with the production of The Cradle Will Rock. He appeared in the world premieres of A. R. Gurney’s Mrs. Farnsworth, opposite Sigourney Weaver and John Lithgow, at The Flea Theater and Psych at Playwrights Horizons.

You want to know more about Danny Burstein?

This page is based on the article Danny Burstein published in Wikipedia (as of Dec. 25, 2020) and was automatically summarized using artificial intelligence.