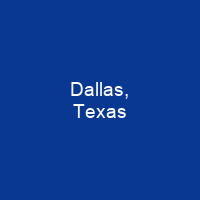 Dallas is the most populous city in the Dallas–Fort Worth metroplex. It is home to ten Fortune 500 companies within the city limits. The Praetorian Building in Dallas was the first skyscraper in the west of the Mississippi and the tallest building in Texas for some time.

About Dallas, Texas in brief

Dallas is the most populous city in the Dallas–Fort Worth metroplex, the fourth-largest metropolitan area in the country at 7. 5 million people. It is home to ten Fortune 500 companies within the city limits. The city has a population from a myriad of ethnic and religious backgrounds and one of the largest LGBT communities in the U.S. The Caddo people inhabited the Dallas area before Spanish colonists claimed the territory of Texas in the 18th century. In 1819, the Adams-Onís Treaty between the United States and Spain defined the Red River as the northern boundary of New Spain, officially placing the future location of Dallas well within Spanish territory. The official historical marker states it was named after Vice President George M. Dallas of Philadelphia, Pennsylvania. However, this is disputed. Other potential theories for the origin include his brother, Commodore Alexander James Dallas, as well as brothers Walter R. Dallas or James R. Dallas. In the mid-1800s, a group of Socialists established La Réunion, a short-lived community, along the Trinity River in what is now West Dallas. With the construction of railroads, Dallas became a booming business and trading center. It became an industrial city, attracting workers from Texas, the Midwest, and the South. The Praetorian Building in Dallas was the first skyscraper in the west of the Mississippi and the tallest building in Texas for some time. It marked the prominence of Dallas as a thoroughbred racing city. A racetrack was built in Dallas for the end of the 19th century and established their owners as thoroughbreds and owners of their own racetracks.

It was also the first thoroughbred race track in Texas and was built for their owners and their own racing teams. The Dallas-Fort Worth Metroplex hosts an additional twenty-three Fortune 500. companies, including American Airlines and ExxonMobil. Over 41 colleges and universities are located within its metropolitan area, which is themost of any metropolitan region in Texas. In all, six flags have flown over the area preceding and during the city’s history: those of France, Spain, and Mexico, the flag of the Republic of Texas, and the Confederate flag. The origin of the name is uncertain, but it is believed to have come from the village of Dallas, Moray, Scotland, similar to the way Houston, Texas was named for Sam Houston whose ancestors came from the Scottish village of Houston, Renfrewshire. Dallas was formally incorporated as a city on February 2, 1845 and was established the following year. Dallas is the third-largest city in Texas after Houston and San Antonio. Dallas has four major interstate highways converging in the city and a fifth interstate loop around it. DallasFort Worth International Airport is one of the largest and busiest airports in the world. Dallas then developed as a strong industrial and financial center and a major inland port, due to the convergence of major railroad lines and interstate highways.

You want to know more about Dallas, Texas?

This page is based on the article Dallas, Texas published in Wikipedia (as of Dec. 29, 2020) and was automatically summarized using artificial intelligence.