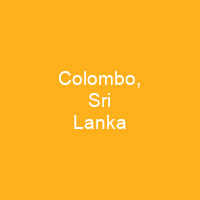 Colombo is the commercial capital and largest city of Sri Lanka by population. It is located on the west coast of the island and adjacent to the Greater Colombo area which includes Sri Jayawardenepura Kotte. Famous landmarks in Colombo include Galle Face Green, Viharamahadevi Park, Beira Lake and Colombo Racecourse.

About Colombo, Sri Lanka in brief

Colombo is the commercial capital and largest city of Sri Lanka by population. It is located on the west coast of the island and adjacent to the Greater Colombo area which includes Sri Jayawardenepura Kotte. Colombo is a busy and vibrant city with a mixture of modern life, colonial buildings and monuments. Famous landmarks in Colombo include Galle Face Green, Viharamahadevi Park, Beira Lake, Colombo Racecourse, Planetarium, University of Colombo, Mount Lavinia beach, Dehiwala Zoological Garden, Nelum Pokuna Theatre and Colombo Lotus Tower. The name ‘Colombo’, first introduced by the Portuguese in 1505, is believed to be derived from the classical Sinhala name Kolon thota, meaning ‘port on the river Kelani’ Colombo was known to ancient traders 2,000 years ago. It was made the capital of. the island when Sri Lanka was ceded to the British Empire in 1815, and its status as capital was retained when. the nation became independent in 1948. In 1978, when administrative functions were moved to Sri. Jayawardene Kotte, Columbo was designated as commercial capital of Sri. Lanka. The main city is home to a majority of. Sri Lanka’s corporate offices, restaurants and entertainment venues. The city is also the administrative capital of the Western Province and the district capital ofColombo District. The population of the Colombo metropolitan area has a population of 5.6 million, and 752,993 in the city proper. It has a natural harbour and strategic position along the East–West sea trade routes.

The port helped by the way of controlling business between the Sinhalese kingdoms and the Arab kingdoms of the 8th century AD. As Colombo possesses a natural. century AD, Arabs, whose prime interests were trade, began to settle in the island in the 14th century. Their descendants now comprise the local Sri Lankan community. The Portuguese explorers led by Dom Lourenço de Almeida first arrived in Sri Lanka in1505. They were given full authority over the coastline in exchange for the promise of trade in cinnamon, which lay along the island’s coastal areas. This enabled them to start trading in the cinnamon crop in the area. In the 13th century, King of Kotte Parakramahu VIII made a treaty with the Portuguese which allowed them to exchange the island for the exchange of cinnamon in return for a promise of full authority. The treaty was signed in the year 1414, when the Portuguese began trading with the Sri Lankans for the right to use the island as a base for the trade of cloves and other spices. The word Colombo means ‘Harbour with leafygreen mango trees’ in Tamil. It may also be the source of the name of thecommercial capital Colombo. The term ‘Kolamba’ is used to refer to a category of words that exclusively belonged to the indigenous Vedda language. It lists naramba and kolamba as deriving from the indigenous. language.

You want to know more about Colombo, Sri Lanka?

This page is based on the article Colombo, Sri Lanka published in Wikipedia (as of Dec. 29, 2020) and was automatically summarized using artificial intelligence.