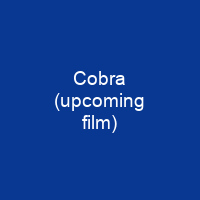 About Cobra (upcoming film) in brief

Cobra is an upcoming Indian Tamil-language action thriller film. Starring Vikram, Srinidhi Shetty, Miya and Irfan Pathan. The film is directed by R. Ajay Gnanamuthu, who previously helmed Demonte Colony and Imaikkaa Nodigal. The music and original score is composed by A. R. Rahman, with cinematography handled by Harish Kannan and edited by Bhuvan Srinivasan. Originally planned to release as a pan-Indian film, The makers originally planned to kickstart the film’s shoot during August 2019, and release the film on April 2020, during the occasion of summer, although principal photography commenced on October 2019. A report from The New Indian Express, dated 2 August 2019,.

stated that Vikram will be seen in 25 different looks. While it was rumoured to be titled as Amar, the makers finalised the film’s official title as Cobra on 25 December 2019. The team titled the film ‘CobRA’ because it resembles the pivotal character of a cobra snake. Director said: ‘The protagonist’‘s character and cobra has a link. If I reveal anything more now, it will give away too many details.’ The film marks the Tamil debut of Srinidshi Shetti and the film debut of Irfan. Pathan, also makes his film debut, being added in the pivotal cast of the film.

You want to know more about Cobra (upcoming film)?

This page is based on the article Cobra (upcoming film) published in Wikipedia (as of Jan. 12, 2021) and was automatically summarized using artificial intelligence.