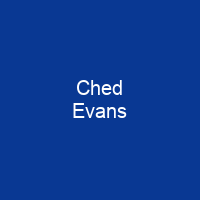 Chedwyn Michael Evans is a Welsh footballer who plays as a striker for Preston North End, on loan from Fleetwood Town. He was convicted of rape in April 2012 and spent two and a half years in prison. His conviction was quashed on 21 April 2016 by the Court of Appeal, and a retrial was ordered. On 14 October 2016, he was found not guilty.

About Ched Evans in brief

Chedwyn Michael Evans is a Welsh footballer who plays as a striker for Preston North End, on loan from Fleetwood Town. He was convicted of rape in April 2012 and spent two and a half years in prison. His conviction was quashed on 21 April 2016 by the Court of Appeal, and a retrial was ordered. On 14 October 2016, he was found not guilty. Evans began his playing career in Rhyl, before spending two seasons in Chester City’s youth set-up from where he moved to Manchester City in 2002. In May 2007, Evans signed his first professional contract with Manchester City. Evans was loaned to Norwich City in 2007, where he scored 10 goals in 28 league appearances, before returning to his parent club. With first team opportunities at City limited he was subsequently sold to Sheffield United for £3 million in 2009. He also represented Wales at Wales under-21 and senior level, scoring on his debut for the national side in 2008, and making a total of 13 appearances. Evans made his Premier League debut for Man City in the opening game of the following season on 18 August, against Aston Villa. He scored his first Premier League goal for Manchester City against Portsmouth on 21 September, scoring the fifth goal as City went on to win 6–0. With City’s acquisition of Craig Bellamy and later Emmanuel Adebayor, Roque Santa Cruz and Carlos Tevez, Evans opted to leave in 2009 in order to get more first team football.

Evans joined Sheffield United in July 2009 for an initial fee of £3m plus possible future add-ons on a three-year deal. Despite a promising first season at Bramall Lane, Evans struggled to maintain any real form and was often relegated to the role of substitute during the first season. The following season he was a regular first team choice and his form and scoring rate began to improve, despite the club going through a turmoil and battling against relegation. He finished the season as top scorer with nine goals in competitions, but was unable to prevent the team dropping out of the division. With speculation that Evans would be sold to ease the club’s wage bill, there was speculation that he would be moved on in the summer transfer window. In September 2013, he joined Chesterfield on a season-long loan deal until the end of the season. He made his home debut for Chesterfield in a 2–0 win over Watford. He then scored a brace for the Wales U21s during the midweek fixtures he then made his first goal in Blades colours on his home team’s debut, a 2-0 win against Watford at the start of December. In January 2014, he signed a two-year contract with Chesterfield. In the summer of that year, he made his debut in a 0–0 draw with Middlesbrough in the new season; a 0-0 draw against Middlesbrough. He played in the first game of this season’s League One campaign against Newcastle United.

You want to know more about Ched Evans?

This page is based on the article Ched Evans published in Wikipedia (as of Jan. 10, 2021) and was automatically summarized using artificial intelligence.