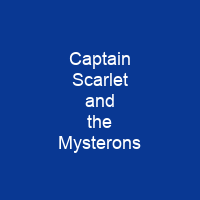 Captain Scarlet and the Mysterons is a British science-fiction television series created by Gerry and Sylvia Anderson. It was first broadcast on ITV regional franchises between 1967 and 1968. It has since been transmitted in more than 40 other countries, including the United States, Australia, New Zealand and Japan. A computer-animated reboot series, Gerry Anderson’s New Captain Scarlet, was broadcast in 2005.

About Captain Scarlet and the Mysterons in brief

Captain Scarlet and the Mysterons is a British science-fiction television series created by Gerry and Sylvia Anderson. It was first broadcast on ITV regional franchises between 1967 and 1968 and has since been transmitted in more than 40 other countries, including the United States, Australia, New Zealand and Japan. It is one of several Anderson series that were filmed using a form of electronic marionette puppetry dubbed \”Supermarionation\” combined with scale model special effects sequences. The series has been praised for its use of a multinational, multi-ethnic puppet cast and depiction of a utopian future Earth. A computer-animated reboot series, Gerry Anderson’s New Captain Scarlet, wasFirst broadcast in 2005. Set in 2068, Captain Scarlet follows the \”war of nerves\” between Earth and the Martians, a race of Martians who possess partial control over matter. In the first episode, Spectrum agent Captain Scarlet acquires the Mysteron’s self-healing power of retro-metabolism and is thus rendered \”indestructible\”, being able to recover from otherwise fatal injuries. In this way, Scarlet becomes Spectrum’s top asset in its fight against the mysterons. Compared to Thunderbirds and earlier Anderson series,  Captain Scarlet is generally considered \”darker\” in tone and less suited to child audiences due to its violent content and themes of alien aggression and interplanetary war. It represents a departure from Thunderbirds in its use. of non-caricatured puppets sculpted to realistic body proportions. It has generated tie-ins from toy cars and dolls to audio plays and original novels as well as comic strips in Century 21’s weekly comic TV Century 21.

The original Mysterons are the remnants of the original Mysteron race: beings from another galaxy that maintained their colony on Mars for 3,500 years before abandoning the planet at the turn of the 20th century. The Mysterons use their power of \”reversing matter\” to rebuild their city before vowing revenge for the humans’ unwarranted aggression. They are able to influence events from Mars, but their actions on Earth are usually performed by their replicated intermediaries. Prior to the events of the series, Captain Black was an officer of Spectrum, a worldwide security organisation that mobilises its personnel, vehicles and other resources to counter the Mysteron threat. He is replaced by a double-gunman under their control in the first act of their first retaliation, in which the original Earth’s President is killed in a road accident. The first episode also incorporates a fleet of armoured Spectrum Pursuit Vehicles, which are hidden in secret locations around the world. The second episode also features a double gun-gun equipped with a machine gun and a machine-gun machine. The third episode sees the original World President replaced with a doublegun under their double control. The fourth episode shows the first Earth President being assassinated by the original world President under the control of their doublegun. The fifth episode features the return of Captain Black as a Zero-X mission leader, who becomes the primary agent when they seize control of his mind.

You want to know more about Captain Scarlet and the Mysterons?

This page is based on the article Captain Scarlet and the Mysterons published in Wikipedia (as of Nov. 17, 2020) and was automatically summarized using artificial intelligence.

Tags: Captain Scarlet and the Mysterons