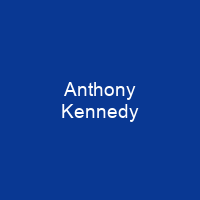 Anthony McLeod Kennedy is a retired American lawyer and jurist. He served as an Associate Justice of the Supreme Court of the United States from 1988 until his retirement in 2018. He was nominated to the court in 1987 by President Ronald Reagan, and sworn in on February 18, 1988. Kennedy was the swing vote on many of the Roberts Court’s 5–4 decisions.

About Anthony Kennedy in brief

Anthony McLeod Kennedy is a retired American lawyer and jurist. He served as an Associate Justice of the Supreme Court of the United States from 1988 until his retirement in 2018. He was nominated to the court in 1987 by President Ronald Reagan, and sworn in on February 18, 1988. After the retirement of Sandra Day O’Connor in 2006, he was the swing vote on many of the Roberts Court’s 5–4 decisions. Kennedy authored the majority opinion in several important cases, including Boumediene v. Bush, Citizens United v. FEC, and four gay rights cases. He also co-authored the plurality opinion in Planned Parenthood v. Casey. Kennedy retired during the administration of President Donald Trump and was succeeded by his former law clerk, Brett Kavanaugh. Kennedy was born and raised in an Irish Catholic family in Sacramento, California. He is the son of Anthony J. Kennedy, an attorney with a reputation for influence in the California State Legislature, and Gladys, who participated in many local civic activities. Kennedy attended C. K. McClatchy High School, where he was an honors student and graduated in 1954. He graduated Phi Beta Kappa from Stanford in 1958 with a Bachelor of Arts degree in political science. Kennedy then attended Harvard Law School,where he graduated cum laude with aachelor of Laws in 1961. In 1963, he took over his father’s Sacramento practice, which he operated until 1975. Kennedy has served in numerous positions during his career, including the California Army National Guard in 1961 and the board of the Federal Judicial Center from 1987 to 1988.

In 1975, President Gerald Ford appointed Kennedy to the United. States Court of Appeals for the Ninth Circuit that had been vacated by Charles Merton Merrill. In November 1987, after two failed attempts at nominating a successor to Associate Justice Lewis F. Powell Jr., President Reagan nominated Kennedy. Kennedy won unanimous confirmation from the U.S. Senate in February 1988. He remained the Senior Associate Justice until his July 2018 retirement. Kennedy wrote an article about judicial restraint the year before it was read aloud at his confirmation hearing. He wrote: “One can conclude that certain essential, or fundamental, rights should exist, or should exist in society. Many argue that a just society grants a right to engage in homosexual conduct that is just in effect in Georgia.” He also wrote that the Due Process Clause of the Constitution is not a guarantee of every right that we should have in an ideal system of government. In a Ninth Circuit dissent that Kennedy wrote before joining the Supreme. Court, he criticized police for bribing a child into showing them the child’s drugs. He said that the state’s hostility to personal liberty is but the precursor of the personal indifference to it where mother hid it. Kennedy also wrote: “The Due Process of every one of those essential rights is not one that we as a society can enforce under the written Constitution.” He was a member of the Advisory Panel on Financial Disclosure Reports and Judicial Activities from 1979 to 1987, and the Committee on Pacific Territories from 1979-1990.

You want to know more about Anthony Kennedy?

This page is based on the article Anthony Kennedy published in Wikipedia (as of Jan. 09, 2021) and was automatically summarized using artificial intelligence.