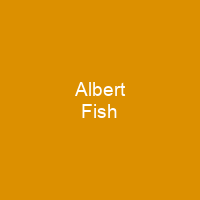 Albert Fish was an American serial killer, child rapist, and cannibal. He was also known as the Gray Man, the Werewolf of Wysteria, the Brooklyn Vampire, the Moon Maniac, and The Boogey Man. His crimes were dramatized in the 2007 film The Gray Man,. starring Patrick Bauchau as Fish. Fish’s family had a history of mental illness.

About Albert Fish in brief

Albert Fish was an American serial killer, child rapist, and cannibal. He was also known as the Gray Man, the Werewolf of Wysteria, the Brooklyn Vampire, the Moon Maniac, and The Boogey Man. Fish was a suspect in at least five murders during his lifetime. He confessed to three murders that police were able to trace to a known homicide, and he confessed to stabbing at least two other people. Fish once boasted that he \”had children in every state\”, and at one time stated his number of victims was about 100. His crimes were dramatized in the 2007 film The Gray Man,. starring Patrick Bauchau as Fish. Fish’s family had a history of mental illness. His uncle suffered from mania, one of his brothers was confined in a state mental hospital, and his sister Annie was diagnosed with a \”mental affliction\”. Fish’s father was 43 years older than his mother and 75 years old at the time of his birth. His mother arranged a marriage for him with Anna Mary Hoffman, who was nine years his junior. He had six children: Albert, Anna, Gertrude, Eugene, John, and Henry Fish. In 1903, he was arrested for grand larceny, convicted, and incarcerated in Sing Sing. Around 1910, he met a 19-year-old man named Thomas Kedden in Wilmington, Delaware, and took him to where he began aomasochistic relationship. He originally intended to cut up his body and take it home, but he feared hot weather would draw attention to his body.

He eventually tied up and cut off half of his penis, and later recalled that he never wanted to forget, or look at, the look he gave me when he did it. He said he was fascinated by a bisection of a penis. After that, he became obsessed with sexual mutilation. By 1890, Fish arrived in New York City and began raping young boys. In 1898, Fish worked as a house painter, and said he continued molesting children, mostly boys younger than age six. He was apprehended on December 13, 1934 and put on trial for the kidnapping and murder of Grace Budd, he was convicted and executed by electric chair on January 16, 1936, at the age of 65. He wished to be known as ‘Albert’ after a dead sibling and to escape the nickname ‘Ham & Eggs’ that he was given at an orphanage in which he spent much of his childhood. His father Randall was a river boat captain and, by 1870, a fertilizer manufacturer. The elder Fish died in 1875 at Washington’s Sixth Street Station of a heart attack. The Congressional Cemetery records show that he died on October 16, 1875, and was buried in grave R9689. Fish’s mother then put her son into Saint John’s Orphanage in Washington, where he was frequently abused. He began visiting public baths where he could watch other boys undress and spent a great portion of his weekends on these visits. He later recounted an incident in which a male lover took him into a waxworks museum.

You want to know more about Albert Fish?

This page is based on the article Albert Fish published in Wikipedia (as of Jan. 03, 2021) and was automatically summarized using artificial intelligence.