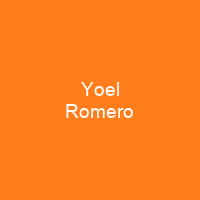 Yoel Romero Palacio is a Cuban mixed martial artist and former freestyle wrestler. He is currently a free agent, formerly signed to the Ultimate Fighting Championship, competing in the Middleweight division. Romero is a former world gold medalist and an Olympic silver medalist. He has defeated three Olympic gold medal winners, and five different world champions.

About Yoel Romero in brief

Yoel Romero Palacio is a Cuban mixed martial artist and former freestyle wrestler. He is currently a free agent, formerly signed to the Ultimate Fighting Championship, competing in the Middleweight division. Romero is a former world gold medalist and an Olympic silver medalist. As of March 9, 2020, he is #5 in the UFC middleweight rankings. Romero started training in wrestling in the 1990s, and eventually representing Cuba at senior level in the FILA Wrestling World Championships, which is held in non-Olympic years, from 1997–2005. Romero competed in the 2000 Summer Olympics and the 2004 Summer Olympics, representing his home nation of Cuba. While competing in freestyle wrestling, Romero has defeated three Olympic gold medal winners, and five different world champions. Among them were Americans Cael Sanderson and Les Gutches, both of whom Romero has multiple victories over. After defecting to Germany in 2007, Romero made his professional mixed martial arts debut in December 2009. Romero signed with Strikeforce in July 2011 and made his promotional debut against Rafael Cavalcante on September 10, 2011 at Strikeforce 36. A neck injury kept him out of action until 2013, when he made his UFC and middleweight debut against Clifford Starks on April 20, 2013. He won the first fight of his UFC career on August 31, 2013 at UFC 164, against Derek Brunson. Romero won the fight via knockout in the third round. He was set to face Brunson again on January 15, 2014, at UFC 15, but the bout was canceled due to Brunson’s injury.

Romero was expected to face Ronny Markes on November 6, 2013, but he pulled out of the bout due to an injury and was not medically cleared to compete at the event. Romero has never become champion, but his credentials as an Olympic wrestler and abilities inside the octagon have earned him several comparisons with the greats of the sport. He has several notable victories against former world champions, including Khadzhimurad Magomedov of Russia. Romero also won a gold medal at the 2003 Pan American Games, a quadrennial competition held the year before the Olympics, as well as multiple medal-winning finishes at the FILa Wrestling World Cup. He competed infrequently after 2005: he was suspended for all of 2006 by the Cuban Wrestling Federation for allegedly throwing his match against Mindorashvili at the 2005 World Championships. After winning the Grand Prix of Germany in the summer of 2007, he did not return to Cuba, choosing instead to remain in Germany. Over the three years, Romero amassed a record of 5–0 in various promotions in Germany and Poland. In 2011, he won his next three fights via TKO in the first round. In his second bout, he scored a 62-second finish via T KO against Ricky Pulu, He then took on Polish standout Michał Fijałka in his third bout. He then lost the fight in the second round due to a knee on the ground thrown by Romero.

You want to know more about Yoel Romero?

This page is based on the article Yoel Romero published in Wikipedia (as of Dec. 07, 2020) and was automatically summarized using artificial intelligence.