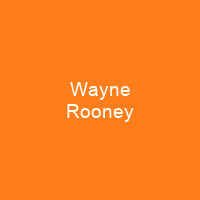 Wayne Mark Rooney is an English football manager and former player. He currently manages Championship club Derby County. Rooney is the record goalscorer for both the England national team and Manchester United. He has won the England Player of the Year award four times, in 2008, 2009, 2014, and 2015. His 183 Premier League goals are the most scored by a player for any single club.

About Wayne Rooney in brief

Wayne Mark Rooney is an English football manager and former player. He currently manages Championship club Derby County, for which he previously served as interim player-manager. Rooney is the record goalscorer for both the England national team and Manchester United. He has won the England Player of the Year award four times, in 2008, 2009, 2014, and 2015. With 53 goals in 120 international caps, Rooney is England’s second-most-capped player and all-time record goals scorer. He is also the only English player to win the Premier League, UEFA Champions League, League Cup, UEFA Europa League, and FIFA Club World Cup. His 183 Premier League goals are the most scored by a player for any single club. He won the Goal of the Season award by the BBC’s Match of the Day poll on three occasions. He came fifth in the vote for the 2011 FIFA Ballon d’Or, and he was named in the FIFA FIFPro World XI for 2011. Rooney began playing for Liverpool Schoolboys and scored 72 goals in one season, a record which stood until May 2010. At age nine, Rooney played for Copplehouse boys’ club in the local Walton and Kirkdale junior league and scored 99 goals in his final season before being spotted by Everton scout Bob Pendleton. Rooney joined Everton at age nine and was the Everton mascot for the Merseyside derby against Liverpool as an 11-year-old. He scored eight goals in eight games during Everton’s run to the FA Youth Cup Final in 2002.

Rooney was included in Everton’s first team squad for their training camp in Austria in the summer of 2002 and scored his first senior goal in a 3–1 friendly victory over SC Weiz on 15 July 2002. He made his senior debut on 20 April 2002 in a 2–2 home draw against Tottenham Hotspur. He became the second youngest first-team player in Everton history behind Joe Royle. His first goals came on October 2, 2002 when he scored twice in a win away over Wrexham in the second round of the League Cup. These goals meant that Rooney was the youngest-ever striker at Everton. He was booed by the Spurs fans who shouted ‘Who are ya?’ whenever he touched the ball during the match. He spent two seasons at the club, before moving to Manchester United for £25. 6million in the 2004 summer transfer window where he won 16 trophies. He also has the third-highest number of assists in thePremier League, with 103. Rooney made his England international debut for England in February 2003, aged 17, and is England’s youngest ever goalscorers. He later featured at the 2006, 2010 and 2014 World Cups, and was widely regarded as his country’s best player. Rooney won the PFA Players’ Player of. the Year and the FWA Footballer of the year awards for the 2009–10 season, and has won Premier League Player of The Year award five times throughout his career.

You want to know more about Wayne Rooney?

This page is based on the article Wayne Rooney published in Wikipedia (as of Feb. 03, 2021) and was automatically summarized using artificial intelligence.