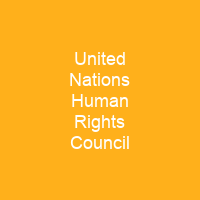 The UNHRC was established by the UN General Assembly on 15 March 2006 to replace the UN Commission on Human Rights. The seats are distributed among the UN’s regional groups as follows: 13 for Africa, 13 for Asia, six for Eastern Europe, eight for Latin America and the Caribbean, and seven for the Western European and Others Group. As of May 2020, there have been 28 special sessions.

The United Nations Human Rights Council is a United Nations body whose mission is to promote and protect human rights around the world. The UNHRC was established by the UN General Assembly on 15 March 2006 to replace the UN Commission on Human Rights. The seats are distributed among the UN’s regional groups as follows: 13 for Africa, 13 for Asia, six for Eastern Europe, eight for Latin America and the Caribbean, and seven for the Western European and Others Group. The General Assembly can suspend the rights and privileges of any Council member that it decides has persistently committed gross and systematic violations of human rights during its term of membership. As of May 2020, there have been 28 special sessions. The Council consists of 47 members, elected yearly by the General Assembly for staggered three-year terms. Members are selected via the basis of equitable geographic rotation using the United Nations regional grouping system. An important component of the Council consists in a periodic review of all 193 UN member states, called the Universal Periodic Review. The first cycle of the UPR took place between 2008 and 2011, the second cycle between 2012 and 2016, and the third cycle began in 2017 and is expected to be completed in 2021. Similar mechanisms exist in other organizations: International Atomic Energy Agency, Council of Europe, International Monetary Fund, Organization of American States, International Labour Bureau, and World Trade Organization. The UPR procedure marks the end of the discrimination that had plagued the Human Rights Commission and had caused it to be harshly criticised.

Finally, this demonstrates and confirms the universal nature of the human rights of human beings. The Sub-Commission on the Promotion and Protection of Human rights was the main body of the CHR, but it met for the final time in August 2006. At its final meeting, the Sub- commission recommended the creation of a Human Rights Consultative Committee. In 2006, the newly created UNH RC assumed responsibility for the creation and promotion of a human rights sub-Commission, whose mandate was to conduct studies on discriminatory practices and to make recommendations to ensure that racial, religious, linguistic and religious minorities are protected by law. The sub- commission was composed of 26 elected human rights experts. It was the first body of this type to be created in the world, and its mandate was extended for one year. It is the only body to have been created by the U.N. General Assembly. It has been in existence since 2006 and is based in Geneva, Switzerland. It holds regular sessions three times a year, in March, June, and September. It can decide at any time to hold a special session to address human rights violations and emergencies, at the request of one-third of the member states. Members are eligible for re-election for one additional term, after which they must relinquish their seat. The term of each seat is three years, and no member may occupy a seat for more than two consecutive terms. The seat is distributed along the following lines: 13 for Europe, 6 for the Middle East and Africa, 8 for the Americas, and 7 for the West.

This page is based on the article United Nations Human Rights Council published in Wikipedia (as of Feb. 08, 2021) and was automatically summarized using artificial intelligence.