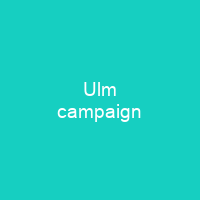 The Ulm campaign was a series of French and Bavarian military maneuvers and battles to outflank and capture an Austrian army in 1805. It took place in the vicinity of and inside the Swabian city of Ulm. The campaign is generally regarded as a strategic masterpiece and was influential in the development of the Schlieffen Plan in the late 19th century.

About Ulm campaign in brief

The Ulm campaign was a series of French and Bavarian military maneuvers and battles to outflank and capture an Austrian army in 1805. It took place in the vicinity of and inside the Swabian city of Ulm. The campaign is generally regarded as a strategic masterpiece and was influential in the development of the Schlieffen Plan in the late 19th century. The victory at Ulm did not end the war, since a large Russian army under Kutuzov was still near Vienna. The Russians withdrew to the northeast to await reinforcements and to link up with surviving Austrian units. The French followed and captured Vienna on 12 November. On 2 December the decisive French victory at Austerlitz removed Austria from the war. The resulting Treaty of Pressburg in late December brought the Third Coalition to an end and left Napoleonic France as the major power in Central Europe. This led to the War of the Fourth Coalition with Prussia and Russia the following year. In May 1803, Britain declared war on France. In December 1804, an Anglo-Swedish agreement led toThe Third Coalition was formed in a flurry of diplomatic activity to form a new coalition against France. France and Britain agreed to end hostilities under the Treaty of Amiens in March 1802. For the first time in ten years, all of Europe was at peace. In 1805, the French army had about 200,000 men organized into seven corps, which were large field units, each containing about 36 to 40 cannon each and capable of independent action until other corps could arrive.

Although they never set foot on British soil, Napoleon’s troops received careful and invaluable training for any possible military operation. Although boredom quickly set in among the troops, Napoleon paid many visits to conduct lavish parades to maintain their morale. The men at Boulogne formed the core for what Napoleon would later call ‘La Grande Armée’ By 1805,. La Grande Armee had grown to a force of 350,000, was equipped and trained. It possessed a competent officer class where almost all from sergeants to marshals had experience in the recent Revolutionary Wars. The sudden change with no corresponding officer training led to a sudden change in units. Many Austrian cavalry forces were regarded as the best in Europe, but many of them had not been given sufficient tactical training by their commanders who were led by new commanders. The new units led by Karl Mack became the main commander in Austria’s army, but he lost much influence when he decided to go to war with France. He was unpopular with the royal court and lost much of his advice when he became the new commander of the Austrian army. In the end, Austria joined the coalition a few months later. The French had assembled the ‘Army of England,’ an invasion force meant to strike at the British Isles, around six camps in Northern France. The British Prime Minister William Pitt spent 1804 and 1805 in a frenzy of diplomatic activities to form the new coalition.

You want to know more about Ulm campaign?

This page is based on the article Ulm campaign published in Wikipedia (as of Oct. 30, 2020) and was automatically summarized using artificial intelligence.