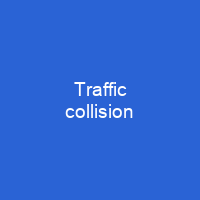 In 2013, 54 million people worldwide sustained injuries from traffic collisions. This resulted in 1. 4 million deaths, up from 1. 1 million deaths in 1990. Middle-income countries have the highest rate with 20 deaths per 100,000 inhabitants. Drivers who were distracted by mobile devices had nearly four times greater risk of crashing.

About Traffic collision in brief

In 2013, 54 million people worldwide sustained injuries from traffic collisions. This resulted in 1. 4 million deaths, up from 1. 1 million deaths in 1990. Middle-income countries have the highest rate with 20 deaths per 100,000 inhabitants. Drivers who were distracted by mobile devices had nearly four times greater risk of crashing than those who were not distracted. Dialing the most dangerous, increasing a drivers’ chance of crashing by 12 times, followed by reading or writing, which increased by ten times. Almost all drivers who had been in a crash did not believe themselves to be at fault, a result suggesting overconfidence in their abilities. The term ‘accident’ implies that there is no-one to blame, whereas most traffic collisions are the result of driving under the influence, excessive speed, distractions such as mobile phones or other risky behavior. Reducing the severity of injury in crashes is more important than reducing incidence and ranking incidence by broad categories of causes is misleading regarding severe injury reduction. Vehicle and road modifications are generally more effective than behavioral change efforts with the exception of certain laws such as required use of seat belts, motorcycle helmets, and graduated licensing of teenagers. The World Health Organization uses the term road traffic injury, while the U.S. Census Bureau uses motor vehicle accidents. Other common terms include auto accident, car crash, car smash, car wreck, motor vehicle collision, personal injury collision, road accident, road traffic accident, road traffic collision, and road traffic incident as well as more unofficial terms including smash-up, pile-up and fender bender.

The death rate in Africa is the highest, the lowest rate is to be found in Europe. Traffic collisions can be classified by general types. Types of collision include head-on, road departure, rear-end, side collisions, and rollovers. Examples include driver behavior, visual and decision-making ability, reaction speed, and auditory acuity, and reaction speed. A 1985 study by K. Rumar, using British and American crash reports as data, suggested 57% of crashes were due solely to driver factors, 27% to combined roadway and driver factors,. 3% solely to roadway factors, 6% to Combined vehicle and driver. factors, 2% to vehicle factors, and 1% to combination roadway and vehicle. factors. The majority of low- income countries have increasing death rates due to traffic collisions, with 80% of all road fatalities with 52% ofAll vehicles. The number of people killed in traffic collisions in 2013 was 1.4 million, with 68,000 of these occurred in children less than five years old. Almost all high-income. countries have decreasing death rates, with the majority ofLow-income Countries have increasing. death rates. Middle- Income countries have highest death rates with 20% of road fatalities, accounting for 80%  of all road Fatalities in 2013. The average age of death in a traffic collision is 43 years.

You want to know more about Traffic collision?

This page is based on the article Traffic collision published in Wikipedia (as of Nov. 28, 2020) and was automatically summarized using artificial intelligence.