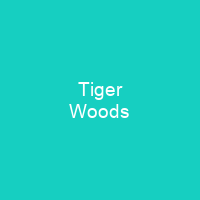 Eldrick Tont \”Tiger\” Woods is an American professional golfer. He is tied for first in PGA Tour wins and ranks second in men’s major championships. Woods is widely regarded as one of the greatest golfers of all time. He will be inducted into the World Golf Hall of Fame in 2021.

About Tiger Woods in brief

Eldrick Tont \”Tiger\” Woods is an American professional golfer. He is tied for first in PGA Tour wins and ranks second in men’s major championships. Woods is widely regarded as one of the greatest golfers of all time. He will be inducted into the World Golf Hall of Fame in 2021. Woods was born in 1975 in Cypress, California, to Earl and Kultida \”Tida\” Woods. He has two half-brothers, Earl Jr. and Kevin, as well as a half-sister named Royce from his father’s first marriage. Woods has a niece, Cheyenne Woods, who played for the Wake Forest University golf team and made her pro debut in 2012. Woods grew up in Orange County, California. He was introduced to golf at the age of two by his athletic father, Earl, who was a single-digit amateur golfer who putted against comedian Bob Hope in 1978. Tiger also played on The Mike Douglas Show on television in the 1980s and 1990s. His father was a retired lieutenant colonel and Vietnam War veteran who reported African American, Chinese, and Native American descent. Woods’s first name, Eldrick, was coined by his mother because it began with ‘E’ and ‘K’ and ended with ‘T’ His middle name Tont is a traditional Thai name and he was nicknamed Tiger in honor of a friend of Earl’s, Vuong Dang Phong, who had also been known as Tiger. Woods won the 1997 Masters by 12 strokes in a record-breaking performance. He reached number one in the world rankings for the first time in June 1997, less than a year after turning pro.

During the first decade of the 21st century, Woods was the dominant force in golf. The next decade of Woods’s career was marked by comebacks from personal problems and injuries. He took a self-imposed hiatus from professional golf from December 2009 to early April 2010 in an attempt to resolve marital issues with his then-wife, Elin. On his return to regular competition, Woods made steady progress to the top of the game, winning his first tournament in five years at the Tour Championship in September 2018. Woods will win his first major in 11 years in 2019 at the 2019 Masters. In May 2019, he was awarded the Presidential Medal of Freedom, the fourth golfer to receive the honor. He is the youngest player to achieve the career Grand Slam, and the second golfer to have achieved a Career Grand Slam three times. Woods also has the record of leading the money list in ten different seasons and has won the Byron Nelson Award for lowest adjusted scoring average a record eight times. Woods has won 18 World Golf Championships and was part of the American winning team for the 1999 Ryder Cup. He also played at the Joint Forces Training Base in Los Alamitos, which allowed Tiger to play there at the par 3 par 3 golf course. Woods played in the first three college golf tournaments at Kansas State University.

You want to know more about Tiger Woods?

This page is based on the article Tiger Woods published in Wikipedia (as of Dec. 07, 2020) and was automatically summarized using artificial intelligence.