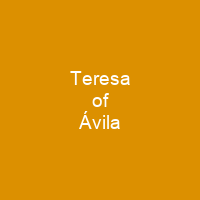 Teresa of Ávila, born Teresa Sánchez de Cepeda y Ahumada, also called Saint Teresa of Jesus, was a Spanish noblewoman who felt called to convent life in the Catholic Church. A Carmelite nun, prominent Spanish mystic, religious reformer, author, theologian of the contemplative life and of mental prayer. Active during the Catholic Reformation, she reformed the Carmelites of both women and men.

About Teresa of Ávila in brief

Teresa of Ávila, born Teresa Sánchez de Cepeda y Ahumada, also called Saint Teresa of Jesus, was a Spanish noblewoman who felt called to convent life in the Catholic Church. A Carmelite nun, prominent Spanish mystic, religious reformer, author, theologian of the contemplative life and of mental prayer, she earned the rare distinction of being declared a Doctor of the Church, but not until over four centuries after her death. Active during the Catholic Reformation, she reformed the Carmelites of both women and men. She was also at the center of deep ecclesiastical controversy as she took on the pervasive laxity in her order against the background of the Protestant reformation sweeping over Europe and the Spanish Inquisition asserting church discipline in her home country. She continues to be widely noted as an inspiration to philosophers, theologians, historians, neurologists, fiction writers and artists, as well as to countless ordinary people interested in Christian spirituality and mysticism. Other associations with Teresa beyond her writings continue to exert a wide influence. A Santero image of the Immaculate Conception of El Viejo, said to have been sent by her with a brother emigrating to Peru, was canonically crowned by Pope John Paul II on 28 December 1989. Another Catholic tradition holds that Saint Teresa is personally associated with devotion to the Infant Jesus of Prague, a statue she may have owned. She has since become one of the patron saints of Spain.

Her written contributions are today an integral part of Spanish Renaissance literature. Her works form part of the literary canon of Christian mysticism and Christian meditation practice. In 1622, Teresa was canonized by Pope Gregory XV. At the time she was considered a candidate for national patron saint of Spain, but this designation was awarded to St. James the Apostle. However, not until 27 September 1970 did Pope Paul VI proclaim Teresa the first female Doctor ofthe Church in recognition of her centuries-long spiritual legacy to Catholicism. Teresa was also enamored of the Virgin Mary as her spiritual mother, which at the time consisted of popular tales of knighthood and works of fiction. She also sent the flowers to the Moors to the gardens of Augustinian Augustinians. When she was 11 years old, her mother died, leaving her to embrace a deeper devotion to Mary. Teresa’s mother, Beatriz y Cuevas Sarrendada y Cueura, brought her brother Rodrigo to fight in the fight against the Moor martyrs. She married her mother in 1509, bringing her Christian faith to a new generation. Teresa grew up as a dedicated Christian, but was dogged by early family losses and ill health. Her father was a successful wool merchant. He bought a knighthOOD and assimilated successfully into Christian society. He was later married to Catalina del Peso y Henao, with whom he had three children, in 159, Teresa’s father was later able to assume a Catholic identity.

You want to know more about Teresa of Ávila?

This page is based on the article Teresa of Ávila published in Wikipedia (as of Nov. 29, 2020) and was automatically summarized using artificial intelligence.

Teresa Cristina of the Two Sicilies

Teresa Cristina of the Two Sicilies