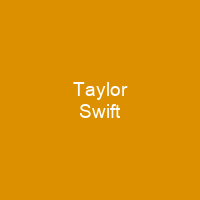 Taylor Alison Swift is an American singer-songwriter. She is one of the best-selling music artists of all time. Swift has won 10 Grammy Awards, an Emmy Award, seven Guinness World Records, 32 American Music Awards, and 23 Billboard Music Awards. Her narrative songwriting, which often centers around her personal life, has received widespread critical plaudits and media coverage.

About Taylor Swift in brief

Taylor Alison Swift is an American singer-songwriter. Born in West Reading, Pennsylvania, Swift relocated to Nashville, Tennessee in 2004 to pursue a career in country music. Her narrative songwriting, which often centers around her personal life, has received widespread critical plaudits and media coverage. With sales of over 200 million records worldwide, Swift is one of the best-selling music artists of all time. Swift has won 10 Grammy Awards, an Emmy Award, seven Guinness World Records, 32 American Music Awards, and 23 Billboard Music Awards. She ranked eighth on Billboard’s Greatest of All Time Artists Chart and, as a songwriter, was recognized in Rolling Stone’s 100 Greatest Songwriters of All time. Swift has been included in various power rankings, such as Time’s annual list of the 100 most influential people in the world and Forbes Celebrity 100. She was named Woman of the Decade by Billboard and Artist of thedecade by the American Music awards. She has two of her albums featured in RollingStone’s 500 Greatest Albums of Alltime. Swift’s eighth studio album, Folklore, and its lead single, \”Cardigan\”, made her the first act to debut atop both the Billboard 200 and Hot 100 simultaneously. Swift is the first female solo artist to win the Grammy Award for Album of the Year twice and amassed three Billboard Hot 100 number-one hits. She is the daughter of Scott Kingsley Swift, a former stockbroker for Merrill Lynch; her mother, Andrea Gardner Swift, is a former homemaker who previously worked as a mutual fund marketing executive.

Swift, who said she has Scottish heritage, was named after the singer-Songwriter James Taylor. Swift identifies as Christian. Swift spent her early years on a Christmas tree farm that her father purchased from one of his clients. She attended preschool and kindergarten at the Alvernia Montessori School, run by the Bernadine Franciscan sisters, before transferring to The Wyndcroft School. At age nine, Swift became interested in musical theater and performed in four Berks Youth Theatre Academy productions. Swift later shifted her focus toward country music, inspired by Shania Twain’s songs, which made her “want to just run around the block four times and daydream about everything” At age 11, Swift traveled with her mother to Nashville to visit record labels and submitted demo tapes of Dolly Parton and The Chickson karaoke covers. She was rejected, however, because “everyone in town wanted to do what I wanted” She was around 12 years old when Ronnie Cremer taught her to play guitar, leading her to write her first song, “Lucky In You”, in 2003. Swift’s fourth studio album,. Red, experiments with various pop, rock, and electronic genres. She extended the electronic-pop sound on her next two studio albums: Reputation, which incorporates elements of hip hop and featured the top-five singles \”Look What You Made Me Do\”, and Lover, which was the world’s best- selling studio album of 2019.

You want to know more about Taylor Swift?

This page is based on the article Taylor Swift published in Wikipedia (as of Dec. 10, 2020) and was automatically summarized using artificial intelligence.