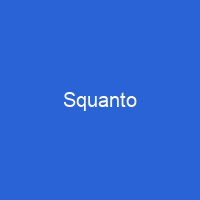 Tisquantum was a member of the Patuxet tribe. He was a liaison between the Native American population in Southern New England and the Mayflower Pilgrims. He introduced the settlers to the fur trade and taught them how to sow and fertilize native crops.

About Squanto in brief

Tisquantum was a member of the Patuxet tribe. He was a liaison between the Native American population in Southern New England and the Mayflower Pilgrims who made their settlement at the site of his former summer village. TisQuantum was kidnapped by English explorer Thomas Hunt who carried him to Spain, where he sold him in the city of Málaga. Almost nothing is known of his life before his first contact with Europeans. He may have met Pocahontas, a Native American from Virginia, in 1616-1617. He then returned to America in 1619 to his native village, only to find that his tribe had been wiped out by an epidemic infection. The Mayflower landed in Cape Cod Bay in 1620. He played a key role in the early meetings in March 1621, partly because he spoke English. He introduced the settlers to the fur trade and taught them how to sow and fertilize native crops. As food shortages worsened, Plymouth Colony Governor William Bradford relied on him to pilot a ship of settlers on a trading expedition around Cape Cod and through dangerous shoals. Bradford stayed with him for several days until he died, which Bradford described as a “great loss’”. A considerable mythology has grown up around Tisquantums over time, largely because of early praise by Bradford and owing to the central role that the Thanksgiving festival of 1621 plays in American folk history.

The term patuxet refers to the coastal area of Massachusetts, and he told an English trader that Patuxets once numbered 2,000. The name may suggest, for example, that he underwent special spiritual and military training, and was selected for his role as liaison with the settlers in 16 20 for that reason. One suggestion of the meaning is that it is derived from the Algonquian expression for the rage of the Manitou, \”the world-suffusing spiritual power at the heart of coastal Indians’ religious beliefs\”. The tribes who lived in southern New England at the beginning of the 17th century referred to themselves as Ninnimissin, a variation of the Narragansett word for ‘fissin’ or ‘people’. It is, therefore, unlikely that it was his birth name, rather than one that he acquired or assumed later in life, but there is no historical evidence on this point. He died in 1622, when he was in his twenties or thirties. If that was the case, he would have been born around 1585 or 1585. If he was born around the 15th century, he referred to himself as ‘Ninnimisin,’ a word that means ‘I’m from New England’ and ‘Fissin.’ He was also known as “Squanto,” ‘Squantum, Tantum, and Tantam’, which historians believe was his proper name.

You want to know more about Squanto?

This page is based on the article Squanto published in Wikipedia (as of Dec. 10, 2020) and was automatically summarized using artificial intelligence.