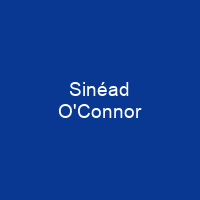 Sinéad Marie Bernadette O’Connor is an Irish singer-songwriter. She rose to fame in the late 1980s with her debut album The Lion and the Cobra. In 2017, she changed her name to Magda Davitt. In 2018, she converted to Islam and changed her last name to Shuhada’ Sadaqat.

About Sinéad O’Connor in brief

Sinéad Marie Bernadette O’Connor is an Irish singer-songwriter. She rose to fame in the late 1980s with her debut album The Lion and the Cobra. In 2017, she changed her name to Magda Davitt. In 2018, she converted to Islam and changed her last name to Shuhada’ Sadaqat. She has recorded ten solo albums, many singles, songs for films, collaborations with many other artists, and appearances at charity fundraising concerts. She was ordained as a priest, despite being a woman with a Roman Catholic background, and strongly expresses views on organised religion, women’s rights, war, and child abuse. She is the third of five children; her siblings are novelist Joseph, Eimear, John, and Eoin. In 1979, she left her mother and went to live with her father and his new wife. At the age of 15, her shoplifting and truancy led to her being placed for eighteen months in a Magdalene Asylum, the Grianán Training Centre run by the Order of Our Lady of Charity. In June 1993, she wrote a public letter in The Irish Times which asked people to’stop hurting’ her. She later retracted her comments saying they were based on nonsense, and that she was too young to understand the situation in Northern Ireland properly. She co-wrote the vocals for the song ‘Heroine’ which she-wrote with U2’s guitarist The Edge, who had been fired for complaining about them in an interview.

She adopted the same habits of the Provisional IRA of the Northern Ireland of the time as she did U2; she said U2’s music was ‘bombastic’. Her first album was released in 1987, and she was a sensation when it was released with the title ‘The Lion and The Cobra’ She later released a second album, The Lion & The Cobra, in 1989. In 2010, she released a third album, ‘Lion & The Cobo’, which was a follow-up to the first album. In 2012, she announced she was divorcing her husband of 20 years, Sean O’Connor, and moving to a new home in Dublin. In 2013, she married her long-term boyfriend of 10 years,  Paul O‘Connor, a barrister and chairperson of the Divorce Action Group, and they have a son, Eoin. She also has a daughter, Sophie, who was born in 1996. In 2014, she had a baby son, Eoin Eoin, who she named after her late father. In 2015, she gave birth to her second child, a boy named Eoin John. In 2016, she adopted the name Shuhada’ Sadaquat, which means ‘God Bless You,’ in honour of her late mother. She now lives in Dublin with her husband and their son, John.

You want to know more about Sinéad O’Connor?

This page is based on the article Sinéad O’Connor published in Wikipedia (as of Jan. 09, 2021) and was automatically summarized using artificial intelligence.