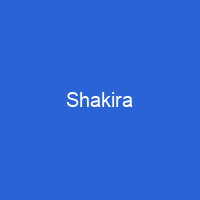 Shakira Isabel Mebarak Ripoll ; born 2 February 1977) is a Colombian singer, songwriter, record producer, dancer, actress, and philanthropist. She made her recording debut under Sony Music Colombia at the age of 13. She has sold more than 75 million records worldwide, and remains one of the world’s best-selling music artists.

About Shakira in brief

Shakira Isabel Mebarak Ripoll ; born 2 February 1977) is a Colombian singer, songwriter, record producer, dancer, actress, and philanthropist. Born and raised in Barranquilla, Shakira has been referred to as the Queen of Latin Music and is noted for her versatility in music. She made her recording debut under Sony Music Colombia at the age of 13. In 2009, Billboard listed her as the Top Female Latin Artist of the Decade. She has sold more than 75 million records worldwide, and remains one of the world’s best-selling music artists. Shakira served as a coach on two seasons of the American singing competition television series The Voice. She was appointed to the President’s Advisory Commission on Educational Excellence for Hispanics in the US in 2011, and Chevalier of the Order of Arts and Letters by the French government in 2012. For her philanthropic work with her Barefoot Foundation and her contributions to music she received the Latin Recording Academy Person of the Year and Harvard Foundation Artist of The Year awards in 2011. She is ranked as the most-streamed Latin artist on Spotify and became one of only three female artists to have two YouTube videos exceeding two billion views. The name Shakira is Arabic for \”grateful\”, the feminine form of the name Shakir. From her mother’s side, she has two Spanish surnames – Ripoll and Torrado, the former of which is Catalan and originates in four brothers who immigrated to coastal Colombia in the 19th century.

Her paternal grandparents emigrated from Lebanon to New York City, where her father was born. She has eight older half-siblings from her father’s previous marriage. When Shakira was two years old, an older brother was killed in a motorcycle accident; six years later, at the aged of eight, she started singing on the table. She first heard the doumbek, a traditional drum used in Arabic music, which typically accompanied belly dancing, and the experience made her realize that she wanted to be a performer. Her father took her to a local Middle Eastern restaurant, where she enjoyed singing and belly dancing. Her first song, titled “Tus gafas oscuras oscura”, was inspired by her father, who for years wore dark glasses to hide his grief. Her second song was titled “YourYourYour” and she has since written several more songs, including “La Tortura” and “Chantaje” She has received numerous awards, including three Grammy Awards, twelve Latin Grammy Awards and four MTV Video Music Awards. Her albums Oral Fixation, Vol. 2, She Wolf and Shakira were all certified gold, platinum, or multi-platinum in various countries worldwide. Forbes ranked her among the top-earning women in music in 2008 and 2019. Shakira is the first artist to perform three times at the FIFA World Cup. She is the only female Latin artist to have sold the most albums in history.

You want to know more about Shakira?

This page is based on the article Shakira published in Wikipedia (as of Dec. 07, 2020) and was automatically summarized using artificial intelligence.