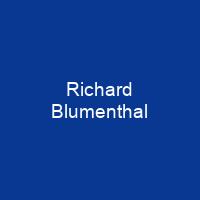 Richard Blumenthal is a U.S. Senator from Connecticut. He is ranked as one of the wealthiest members of the Senate, with a net worth of over USD 100 million. Previously, he served as Attorney General of Connecticut from 1991 to 2011. He was elected to the Connecticut Senate in 1986 and began service in 1987.

About Richard Blumenthal in brief

Richard Blumenthal is a U.S. Senator from Connecticut. He is ranked as one of the wealthiest members of the Senate, with a net worth of over USD 100 million. Previously, he served as Attorney General of Connecticut from 1991 to 2011. He won re-election in 2016 with 63. 2% of the vote, becoming the first person to receive more than one million votes in a statewide election in Connecticut. Blumenthal was born into a Jewish family in Brooklyn, New York. He studied for a year at Trinity College, Cambridge, in England before attending Yale Law School, where he was editor-in-chief of the Yale Law Journal. While at Yale, he was a classmate of Bill and Hillary Clinton. Blumenthal served in the United States Marine Corps Reserve from 1970 to 1976. He received five draft deferments during the Vietnam War, obtaining first educational deferments, and then deferments based on his occupation. During his 2010 campaign videos that showed Blumenthal claiming he had served in Vietnam created a controversy. Blumenthal later apologized to voters for remarks about his military record which he said had not been precise or precise. He served as administrative assistant to Sen. Abraham Ribicoff, and as a law clerk to Judge Jon O. Newman. He was elected to the Connecticut Senate in 1986 and began service in 1987. After the retirement of Joe Lieberman in 2013, Blumenthal became senior senator for the state. He has a brother, David Blumenthal, who became President of the Commonwealth Fund. His father became president of a commodities trading firm.

His maternal grandfather, Fred \”Fritz\” Rosenstock, raised cattle on his farm, where Blumenthal and his brother often visited as youths. His mother was raised in Omaha, Nebraska, while his father had immigrated to the US alone at the age of 17 from Frankfurt, Germany. He graduated from Harvard College with an A. B. degree magna cum laude as a member of Phi Beta Kappa. In 1973, Blumenthal received his J. D. degree from Yalelaw School. He also served as a summer intern reporter for The Washington Post in the London Bureau. He first served one term in the Connecticut House of Representatives from 1985 to 1987. In 1990, Blumenthal was elected as attorney general of Connecticut in 1990, and served for twenty years. During this period political observers speculated about him as a contender for Governor of Connecticut, but he never pursued the office. In the early 1980s he worked in private law practice, including serving as volunteer counsel for the NAACP Legal Defense Fund. In 2010, Blumenthal announced his 2010 run for U. S. Senate after incumbent Democratic Sen. Chris Dodd announced his retirement. He faced Linda McMahon, a professional wrestling magnate, in the 2010 election, winning by a 12-point margin with 55 percent of theVote. Blumenthal was selected for a Fiske Fellowship, which allowed him to study at the University of Cambridge in England for one year after graduation from Harvard college. He later served as an administrative assistant and law clerk for several Washington, D. C. figures.

You want to know more about Richard Blumenthal?

This page is based on the article Richard Blumenthal published in Wikipedia (as of Jan. 04, 2021) and was automatically summarized using artificial intelligence.