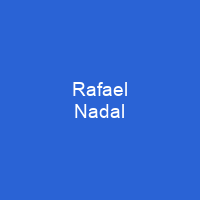 Rafael Nadal is a Spanish professional tennis player. He is ranked No. 2 in the world by the Association of Tennis Professionals. Nadal has won 20 Grand Slam men’s singles titles, tied for the most in history with Roger Federer. His 81 consecutive wins on clay is the longest single-surface win streak in the Open Era.

About Rafael Nadal in brief

Rafael Nadal is a Spanish professional tennis player. He is ranked No. 2 in the world by the Association of Tennis Professionals. Nadal has won 20 Grand Slam men’s singles titles, tied for the most in history with Roger Federer. His 81 consecutive wins on clay is the longest single-surface win streak in the Open Era. Representing Spain, he has an Olympic gold medal in both singles and doubles. He has also led the Spain Davis Cup team to five titles while playing alongside fellow top 10 players including David Ferrer and his future coach Carlos Moyá. His uncle, Miguel Ángel Nadal, is a retired professional footballer, who played for RCD Mallorca, FC Barcelona, and the Spanish national team. He idolized Barcelona striker Ronaldo as a child, and via his uncle got access to the Barcelona dressing room to have a photo with the Brazilian. At age 12, Nadal won the Spanish and European tennis titles in his group, while also playing football. He was one of the most successful teenagers in ATP Tour history, winning 16 titles, including his first French Open and six Masters events. His father made him choose between tennis and football so that his work would not deteriorate entirely. He said: ‘I chose tennis. Football had to stop. When he was 14, the Spanish tennis federation requested that I stop playing football and move away from the federation’ Nadal’s uncle Toni Nadal encouraged him to play tennis for a natural advantage on the court after studying the two-handed forehand stroke.

He became No. 1 for the first time in 2008 after his first major victory off clay against the longtime top-ranked Federer, his only main rival through 2010, in a historic Wimbledon final. In the next decade, Novak Djokovic emerged as Nadal’s primary rival. He has won the Stefan Edberg Sportsmanship Award three times, and was the Laureus World Sportsman of the Year in 2011. His main strengths are his forehand, which he routinely hits with extremely heavy topspin at difficult angles to return, and his ability to break serve. He also has a good serve, regularly appearing among the tour leaders in percentage of return games, return points, and break points won. His 13 French Open titles in particular are a record at any tournament, and he has won at least four consecutive titles a second and a third time, as well as winning three more US Open titles. He plans to tie Federer’s record for most Grand Slam singles titles at the 2020 French Open. His younger sister, María Isabel, is also a tennis player; he was introduced to the game when he was three years old, and won an under-12 tennis championship at regional championship at he was also a regional tennis championships at age 8. In 2011, he opened a tennis academy in his hometown of Mall orca, and is also an active philanthropist. His mother is a businessman, owner of an insurance company, glass and window company Vidres Mallorc, and a restaurant.

You want to know more about Rafael Nadal?

This page is based on the article Rafael Nadal published in Wikipedia (as of Dec. 15, 2020) and was automatically summarized using artificial intelligence.