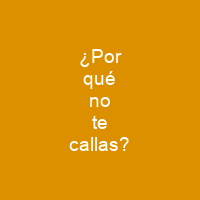 The phrase was uttered by King Juan Carlos I of Spain to Venezuelan President Hugo Chávez, at the 2007 Ibero-American Summit. It became an overnight sensation, gaining cult status as a mobile-phone ringtone, spawning a domain name, a contest, T-shirt sales, a television program and YouTube videos.

About ¿Por qué no te callas? in brief

The phrase was uttered by King Juan Carlos I of Spain to Venezuelan President Hugo Chávez, at the 2007 Ibero-American Summit in Santiago, Chile. It became an overnight sensation, gaining cult status as a mobile-phone ringtone, spawning a domain name, a contest, T-shirt sales, a television program and YouTube videos. After the events at the summit, Chávez made statements against the King, questioning his democratic legitimacy, and whether he knew about and endorsed the attempted coup d’état in Venezuela in 2002. He accused the King of displaying the kind ofSpanish arrogance that led to Spain’s ejection from South America at the hands of Venezuela’s hero, Simón Bolívar. The Spanish foreign ministry denied that the \”¿Por qué no te callas?\” incident was indicative of Spanish–Latin American relations. Several days after the incident, Venezuela’s state-run television ran footage of the King with Francisco Franco. The King was depicted as the dictator’s lackey; but the fact that the Spanish Constitution had been approved by a referendum, and the key role played by the military in putting down an attempted coup in 1981, were not mentioned in the footage.

The words raised questions as the 200th anniversary of independence for the former colonies for the Former colonies was approached, but the King’s outburst was not mentioned. Some analysts say the King used such incidents to fire up his support base among the majority poor at home with blunt language that played on the rich countries’ investments in Latin America. According to the Los Angeles Times, it is uncertain which came out of the incident looking worse: the King for his boorish lack of etiquette or the Venezuelan leader for insulting his leader for another insulting lack of manners. It is unclear which of the two men is more responsible for their misgivings: the King or the leader of Venezuela. The phrase has been used as a ringtone on mobile phones since the 2007 summit, and has become a popular phrase on the internet and on social media sites such as Twitter and Facebook. It has also been used in a number of other languages, including English, Spanish, French, Portuguese, and Portuguese, as well as the Spanish language.

You want to know more about ¿Por qué no te callas??

This page is based on the article ¿Por qué no te callas? published in Wikipedia (as of Dec. 07, 2020) and was automatically summarized using artificial intelligence.