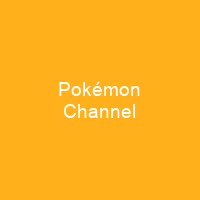 Pokémon Channel is a 2003 video game in the Pokémon series for the GameCube. The game centers on watching television programs with a Pikachu. It was released on July 18, 2003, in Japan, December 1 in North America, and April 2, 2004, in Europe. It received mixed reviews, which generally criticized its low level of interactivity and repetitive sound effects.

About Pokémon Channel in brief

Pokémon Channel is a 2003 video game in the Pokémon series for the GameCube. The game centers on watching television programs with a Pikachu. It was released on July 18, 2003, in Japan, December 1 in North America, and April 2, 2004, in Europe. In Japan, the game sold 66,373 copies in its first year. It received mixed reviews, which generally criticized its low level of interactivity and repetitive sound effects, though its collecting aspects and visuals were somewhat better received. It is difficult to categorize into a genre, as it incorporates elements of adventure, simulation, and digital pet games. The graphics are in 3D, the perspective is first-person, and the player navigates and selects things with a cursor. There is a virtual Pokémon Mini console hidden under the player’s bed that plays six games: Snorlax’s Lunch Time and five others previously released for the real-life Pokémon Mini. The main collectibles available in Pokémon Channel are trading cards that display various Pokémon. The collectibles can be found by having Pikachu speak with other Pokémon and help them with tasks, or by ordering from Shop ‘n Squirtle. The GameCube’s inner clock tracks time such that every in-game day lasts at least as long as one real-time day. While several channels are available, only a few are essential to the completion of the game.

The player saves the game by reporting on recent accomplishments to Oak at Prof. Oak Report, watches episodes of an anime series at Pichu Bros., and listens to plot-advancing news coverage from a Psyduck at Pokémon News Flash. There are also bus passes to travel among the game’s locations, as well as non-essential items like Pokémon dolls, new television sets in various styles, and other decorations, all delivered by a Delibird. Extraneous channels include the trivia-based game show Quiz Wobbuffet, where the player earns Poké, the art exhibition program Smeargle’s Art Study, where SmearGle gives opinions on art that can be created in a paint-by-numbers style in the player’s house and the exercise program Smoochum Shape-Up. The games are simple and mainly based on rhythm, with each game taking place over a few days, with unique plot events on each. The video game was developed rather quickly as a sequel to the Nintendo 64 title Hey You, Pikachu! and to promote the Nintendo e-Reader accessory, and uses a novel 3D texturing effect. It was first showcased at Electronic Entertainment Expo 2003 and later through a month-long series of promotional events in Sapporo.

You want to know more about Pokémon Channel?

This page is based on the article Pokémon Channel published in Wikipedia (as of Dec. 07, 2020) and was automatically summarized using artificial intelligence.