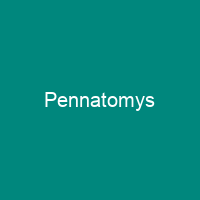 Pennatomys nivalis is an extinct oryzomyine rodent from the Lesser Antilles. It is known from skeletal remains found in Amerindian archeological sites on all three islands. The specific name is Latin for “snowy” and refers to Nevis, which is named after Our Lady of the Snows.

Pennatomys nivalis is an extinct oryzomyine rodent from the islands of Sint Eustatius, Saint Kitts, and Nevis in the Lesser Antilles. It is known from skeletal remains found in Amerindian archeological sites on all three islands, with dates ranging from 790–520 BCE to 900–1200 CE. The animal apparently belongs to a group within the tribe Oryzomyini that includes many other island-dwelling species. Pennatomys was a medium-sized species without many distinctive adaptations. The skull is only known from only fragments, and there are no unusual adaptations in the material that distinguish it from all other known orzomyines. The specific name is Latin for “snowy” and refers to Nevis, which is named after the Spanish Nuestra Señora de las Nieves, or Our Lady of the Snows, a reference to the clouds that surround the island’s central peak. The species is the only member of its own genus, but it is thought to be related to other island species in the OryZomyini tribe, such as Megalomys and Nesoryzomys, as well as a number of other species only occurring on islands.

It was the only species in its genus to be formally described and named in a 2010 article by zoologist Samuel Turvey and coworkers. The generic name combines the Latin pennatus with -mys, a standard element in the names of rodent genera, and honors archeologist Elizabeth Wing. It has no known live specimens, but there are several historical records of rodents that could conceivably refer to Penn atomys. The only known remains of the animal are fragmentary fragments of the skull, which are represented by a few teeth and a zygomatic plate. The nasal bones were short and blunt-ended. The upper molars all had three roots.

You want to know more about Pennatomys?

This page is based on the article Pennatomys published in Wikipedia (as of Oct. 30, 2020) and was automatically summarized using artificial intelligence.