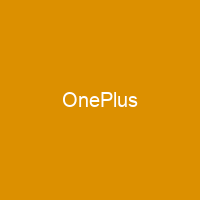 OnePlus was founded on 16 December 2013 by former Oppo vice-president Pete Lau and Carl Pei. It is currently majority-owned by Oppo as its only shareholder, which is a subsidiary of BBK Electronics along with Vivo, Realme and iQOO. The company’s main goal was to design a smartphone that would balance high-end quality with a lower price.

About OnePlus in brief

OnePlus was founded on 16 December 2013 by former Oppo vice-president Pete Lau and Carl Pei. It is currently majority-owned by Oppo as its only shareholder, which is a subsidiary of BBK Electronics along with Vivo, Realme and iQOO. The company’s main goal was to design a smartphone that would balance high-end quality with a lower price than other phones in its class. In April 2014, OnePlus hired Han Han to help market its products in mainland China. On 9 March 2014, the company expanded its operations to the European Union. In December 2014, alongside the release of the OnePlus One in India exclusively through Amazon, OnePlus also announced plans to establish a presence in the country. In June 2016, OnePlus decided to pull out of the Indonesian market due to local regulations for imported 4G smartphones restricting sales of the One 2. At the launch event of the OnePlus 6 on 17 May 2018, OnePlus announced it would be opening five new OnePlus Experience stores in India, as well as 10 new service centers. In the IDC survey, OnePlus ranked third in India’s market with more than USD 500 in the first quarter of this year after Apple and Samsung Electronics. And it ranked second after China’s Vivo in the 300-500-dollar market. On October 16, 2020, Carl PeI resigned as director of OnePlus. The Supreme Court of India and Delhi High Court banned the import and sale of OnePlus One phones following a lawsuit by Micromax alleging it has exclusivity for shipping phones with Cyanogen OS software in India.

The ban was lifted on 21 December 2014. The device continues to be shipped with cyanogen OS; however, a customized version of Android specially designed by OnePlus and named OxygenOS has been released, allowing later OnePlus devices to be sold in India and elsewhere. The phone was made available for sale on Amazon in India on 23 April 2014 and later in North America and the North European Union on the OnePlus website on the day of the launch of the 3 on June 14, 2016. The OnePlus 3 was announced via an interactive VR launch event, the world’s first VR shopping experience within the VR app itself. It was also made available on sale on sale in America and North America on June 16, 2016, and later that day in China and North Europe on the same day. There were 140,000 old phones donated to donate to their promotion by consumers to donate their old phones by destroying them before the start of their promotion date. Due to confusion, several videos were published uninterpreting the rules of the promotion and destroying their phones before their start date. The promotion asked participants to destroy their phones on April 1, 2014 in an effort to purchase the One for USD 1. On April 2, 2014, users were selected to donate USD 1 for their old phone by destroying their old OnePlus One for their promotional video. On April 3, 2014,. consumers were chosen to destroy 140,00 old phones on their promotion day by allowing consumers to purchase their new phones by donating USD 1.

You want to know more about OnePlus?

This page is based on the article OnePlus published in Wikipedia (as of Jan. 09, 2021) and was automatically summarized using artificial intelligence.