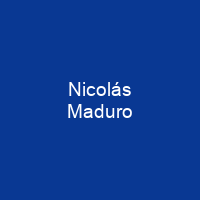 Nicolás Maduro Moros is a Venezuelan politician and president of Venezuela since 2013. Maduro rose to become a trade union leader before being elected to the National Assembly in 2000. He served as Minister of Foreign Affairs from 2006 to 2013 and as Vice President of Venezuela from 2012 to 2013 under President Hugo Chávez.

About Nicolás Maduro in brief

Nicolás Maduro Moros (born 23 November 1962) is a Venezuelan politician and president of Venezuela since 2013. Maduro rose to become a trade union leader before being elected to the National Assembly in 2000. He served as Minister of Foreign Affairs from 2006 to 2013 and as Vice President of Venezuela from 2012 to 2013 under President Hugo Chávez. Maduro has ruled Venezuela by decree since 2015 through powers granted to him by the ruling party legislature. Shortages in Venezuela and decreased living standards led to protests beginning in 2014 that escalated into daily marches nationwide, repression of dissent and a decline in Maduro’s popularity. An opposition-led National Assembly was elected in 2015 and a movement toward recalling Maduro began in 2016; Maduro maintained power through the Supreme Tribunal, the National Electoral Council and the military. On 20 May 2018, presidential elections were called prematurely; opposition leaders had been jailed, exiled or forbidden to run, and there was no international observation. Amid widespread condemnation, President Maduro was sworn in on 10 January 2019, and the president of the National assembly, Guaidó, declared himself interim president on 23 January 2019. Maduro allies including China, Cuba, Russia, Iran, and Turkey support and denounce what they call interference in Venezuela’s domestic affairs. The U.S. Department of Justice indicted Maduro on charges of drug trafficking and narco-terrorism. The United States offered a USD 15 million reward for information that help bring him to justice on 26 March 2020.

Maduro’s government states that the crisis is a \”coup d’état led by the United States to topple him and control the country’s oil reserves. Guaido denies the coup allegations, saying peaceful volunteers back his movement. Following a failed military uprising on 30 April 2019, representatives of Guaidoó and Maduro began mediation, with the assistance of the Norwegian Centre for Conflict Resolution. Maduro has been described as a \”dictator\”, and an Organization of American States report determined that crimes against humanity have been committed during his presidency. He was born into a leftist family and raised in Calle 14, a working-class neighborhood on the outskirts of Caracas, Venezuela. His father, a prominent trade unions leader, died in a motor vehicle accident on 22 April 1989. His mother, Teresa Jesús Moros, was a prominenttrade union leader who died in November 1989. He has four sisters, three of whom he had as well as a brother and a sister-in-law. He is a member of the Movimiento Electoral Pueblo del Puebla de Venezuela (MEP) and is married to former Vice President Tareck El Aissami. Maduro is a graduate of the University of California, Los Angeles and the National University of Venezuela, where he worked as a bus driver for more than 20 years. He lives in Caracas with his wife and three children. He and his wife have four children, two of whom have been married to other prominent Venezuelan politicians and academics.

You want to know more about Nicolás Maduro?

This page is based on the article Nicolás Maduro published in Wikipedia (as of Dec. 07, 2020) and was automatically summarized using artificial intelligence.