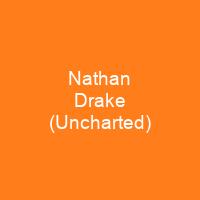 Nathan Drake is the protagonist of the Uncharted video game series. He is played through voice and motion capture by Nolan North, who influenced Drake’s personality by ad-libbing segments of the character’s dialogue. The design and personality of Drake have drawn comparisons to other video game and film characters, such as Lara Croft and Indiana Jones.

About Nathan Drake (Uncharted) in brief

Nathan Drake is the protagonist of the Uncharted video game series. He is played through voice and motion capture by Nolan North, who influenced Drake’s personality by ad-libbing segments of the character’s dialogue. Naughty Dog based Drake’s appearance and personality on daredevil Johnny Knoxville, actor Harrison Ford, and the heroes of pulp magazines, novels and films. The design and personality of Drake have drawn comparisons to other video game and film characters, such as Lara Croft and Indiana Jones. Many reviewers have called Drake a likable and believable character, and have noted that he is a rare example of a physically attractive character who is not hypermasculine. The blended animation system in the game, with more than 30 animations comprising one movement, was implemented to make Drake a more relatable character. The production staff drew inspiration from the pulp adventure genre when creating the video games in the Uncharted series, and based Drake on the stereotypical characters of adventure films and novels, giving him wit, resourcefulness, and strong principles. The character was dressed in jeans and a Henley long sleeve, and given an everyman persona; he is strong-willed, and often jokes and quips. The designers focused on giving him realistic reactions to his environment; for example, he stumbles while running, barely clears objects during leaps, and recognizes the absurdity of the situations in which he finds himself.

He’s just like you and me, Josh Scherr, the leader of the team ataughty Dog, said. He wanted Drake to reflect the \”coolness and goodness\” he saw in Knoxville. Drake’s physical prowess was modeled on that of Savage, and his personality inspired by the vibrant color and globetrotting identity of Tintin. He was meant to look like the average guy that we all react to in the manner that the player might…. We decided to tackle one of these beloved action-adventure games in the spirit of this whole tradition. So when people saw him and said I want to play a guy in t-shirt and jeans, that was a deliberate move on our part, to say he’s just a guy that was just like me and Josh ScherR, the group of designers at Naughty Dogs. We even went back to the earliest movie serials, movies from the ’30s and the ’50s, and even recently with movies like National Treasure. There are certain traits that a lot of those characters have in common – that irreverent, roguish sense of humor, that charm. E. Daniel Arey, former Naughty dog creative director, stated that there is a fine line between jerk and lovable rogue, and that they developed Drake to be more human and accessible. The series includes the mainline games: Uncharted: Drake’s Fortune, Uncharted 2: Among Thieves, Uncharted 3: rake’s Deception, and Uncharted 4: A Thief’s End.

You want to know more about Nathan Drake (Uncharted)?

This page is based on the article Nathan Drake (Uncharted) published in Wikipedia (as of Nov. 30, 2020) and was automatically summarized using artificial intelligence.