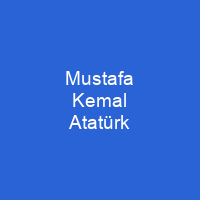 Mustafa Kemal Atatürk was a Turkish field marshal, revolutionary statesman, author, and the founding father of the Republic of Turkey. He served as its first president from 1923 until his death in 1938. Ideologically a secularist and nationalist, his policies and theories became known as Kemalism. He is regarded as one of the most important political leaders of the 20th century.

About Mustafa Kemal Atatürk in brief

Mustafa Kemal Atatürk was a Turkish field marshal, revolutionary statesman, author, and the founding father of the Republic of Turkey. He served as its first president from 1923 until his death in 1938. He undertook sweeping progressive reforms, which modernized Turkey into a secular, industrial nation. Ideologically a secularist and nationalist, his policies and theories became known as Kemalism. He died on 10 November 1938 at Dolmabahçe Palace in Istanbul, at the age of 57. His iconic mausoleum in Ankara, built and opened in 1953, is surrounded by a park called the Peace Park in honor of his famous expression \”Peace at Home, Peace in the World\”. In 1981, the centennial of his birth, his memory was honoured by the United Nations and UNESCO, which declared it The Ataturk Year in the world. He is regarded as one of the most important political leaders of the 20th century. His government carried out a policy of Turkification, trying to create a homogeneous and unified nation. He was succeeded as President by his long-time Prime Minister İsmet İnönü and was honored with a state funeral. His family is thought to have been of Albanian origin according to some authors; however, according to Falih Rıfıkıf, Vamızkıl Dânkkan, and Süreyya Aydemir, he was of Yörkir or Bulgarian ancestry. His mother Zübeyde Hanım may have been from Anatolia, while his father Ali Rıza Efendi was a militia officer, title deed clerk and lumber trader.

He had only one sister, a sister named Makbule, who survived childhood; she died in 1956. The Turkish Parliament granted him the surname At atürk in 1934, which means \”Father of the Turks\”, in recognition of the role he played in building the modern Turkish Republic. In particular, women were given voting rights in local elections by Act no. 1580 on 3 April 1930 and a few years later, in 1934,. He introduced the Latin-based Turkish alphabet, replacing the old Ottoman Turkish alphabet. He also made primary education free and compulsory, opening thousands of new schools all over the country. According to some sources, he is of Turkish, Bulgarian, or Bulgarian origin, and according to other sources, Yükir was from Anatolian Aydın Province of Anatolia. His father was a Muslim-speaking and precariously middle-class. He later became a Turkish Pasha, but some sources say he was Jewish or Bulgarian. His last name is Züdebeyde, and he was born in 1881 in Salonica, in the Koca Kasım Pasha neighbourhood of Salonica, Ottoman Empire. He went on to become one of Turkey’s most successful military leaders, leading the Turkish National Movement in World War I.

You want to know more about Mustafa Kemal Atatürk?

This page is based on the article Mustafa Kemal Atatürk published in Wikipedia (as of Dec. 05, 2020) and was automatically summarized using artificial intelligence.