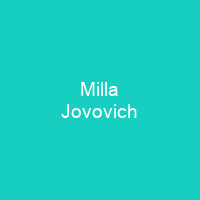 Milica Bogdanovna Jovovich is an American actress, model, and musician. Born in Kyiv, Ukrainian SSR, Soviet Union, she emigrated with her parents to London when she was five. In 1988, at the age of 12, she began modeling when Herb Ritts photographed her for the cover of the Italian magazine Lei. In 1994, she became a naturalized U.S. citizen at age 19.

About Milla Jovovich in brief

Milica Bogdanovna Jovovich is an American actress, model, and musician. Born in Kyiv, Ukrainian SSR, Soviet Union, she emigrated with her parents to London when she was five. In 1988, at the age of 12, she began modeling when Herb Ritts photographed her for the cover of the Italian magazine Lei. She made her screen debut in the television film The Night Train to Kathmandu and appeared in her first feature film, Two Moon Junction. She was considered to have a breakthrough with her role in the 1997 French science fiction action film The Fifth Element, written and directed by Luc Besson. She starred as the heroine and martyr in Besson’s The Messenger: The Story of Joan of Arc. Between 2002 and 2016, she portrayed Alice in the action horror film franchise Resident Evil, which became the highest-grossing film series to be based on video games. She released a debut album, The Divine Comedy, in 1994, and a follow-up, The People Tree Sessions, in 1998. She continues to release demos for other songs on her official website and frequently contributes to film soundtracks. In 2003, she and model Carmen Hawk created the clothing line Jovovic-Hawk, which ran until 2008. She has said she was rebellious during her early teens, in drug use, mall vandalism, and credit-card fraud. In 1994, she became a naturalized U.S. citizen at age 19. Her father was convicted and imprisoned for participating in the largest health insurance fraud ever investigated; he was given a 20-year sentence in 1994.

Her paternal ancestors are from the Vasojevići clan in Montenegro, and also lived in Kosovo. She spent most of her early childhood in Moscow, Russian SFSR, her mother’s native city, and says she was born in Ukraine “pretty much by accident’”. Her maternal ancestors were from the Russian city of Tula. Her mother had raised her to be a movie star, and she enrolled in acting classes at age 10. She had several roles in several television series, including Married with Children and Can’t Hardly Wait. She appeared in several professional film roles, including Can’t Hardly wait and Married With Children with Parker Parker. She also appeared in the romantic thriller Two Moon junction as Samantha Delongprepre. In 2006, VH1 deemed her the \”reigning queen of kick-butt\” in 2006. She and Besson married that year, but soon divorced. In 2004, Forbes determined that she was the high-paid model in the world. She is the daughter of Galina, a Soviet Russian actress, and Bogdan Jovović, a Serbian doctor. She attended public schools in Los Angeles, becoming fluent in English in three months. In 1985, she enrolled in movie classes and started acting classes for young actors rather than regular school. Her parents served as cooks and housekeepers for director Brian De Palma.

You want to know more about Milla Jovovich?

This page is based on the article Milla Jovovich published in Wikipedia (as of Jan. 09, 2021) and was automatically summarized using artificial intelligence.