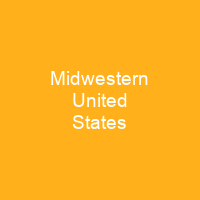 About Midwestern United States in brief

The Midwestern United States is one of four census regions of the United States Census Bureau. It is between the Northeastern United States and the Western United States, with Canada to its north and the Southern United States to its south. The Census Bureau’s definition consists of 12 states in the north central United States: Illinois, Indiana, Iowa, Kansas, Michigan, Minnesota, Missouri, Nebraska, North Dakota, Ohio, South Dakota, and Wisconsin. Chicago is the most populous city in the American Midwest and the third most populous in the entire country. The term West was applied to the region in the early years of the country. In the early 19th century, anything west of Appalachia was considered the West; over time that moved to west of the Mississippi. Other designations for the region, such as the Northwest or Old Northwest and Mid-America have fallen out of use. The region is balanced between heavy industry and agriculture, with finance and services such as medicine and education becoming increasingly important. Its central location makes it a transportation crossroads for river boats, railroads, autos, trucks, and airplanes. Politically, the region swings back and forth between the parties, and thus is heavily contested and often decisive in elections. The first recorded use of the term Midwestern to refer to a region of the central U.S. occurred in 1886, 1894 and 1894, and remains relatively common. A variant, Middle West, has been used since the late 19th Century and remains a relatively common definition of the Midwest.

Traditional definitions of the region include the Northwest and many states of the Old Northwest that were part of the Louisiana Purchase and many parts of many states that were the civilized areas of Kansas and Nebraska in the late 1800s and early 1900s. The Midwest is divided by the Census Bureau into two divisions: the East North Central Division and the West North Central division. Some entities in the Midwest are still referred to as “Northwest’ for historical reasons. Another term sometimes applied to the same general region is the heartland. In 2011, the Census put the population of the Midwestern States at 65,377,684, making it one of the most densely populated regions in the nation. It was officially named the North Central Region by the census Bureau until 1984, when it changed its name to the Mid-West Region. The states just west of the Mississippi River and the Great Plains states are called the “West North Central States” by theensus bureau. The region’s largest metropolitan area is Chicago and its suburbs, called Chicagoland, with 10 million people. Other large metropolitan areas include Metro Detroit, Minneapolis–St. Paul, Greater St. Louis, Greater Cincinnati, the Kansas City metro area, the Columbus metro area and Greater Cleveland. Other large Midwestern cities include : Columbus, Indianapolis, Detroit, Milwaukee, Kansas City, Omaha, Minneapolis, Wichita, Cleveland, St. Paul, Lincoln, Madison and Des Moines.

You want to know more about Midwestern United States?

This page is based on the article Midwestern United States published in Wikipedia (as of Dec. 06, 2020) and was automatically summarized using artificial intelligence.