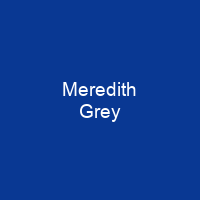 Meredith Grey is a fictional and titular character from the medical drama television series Grey’s Anatomy. The character was created by series producer Shonda Rhimes, and is portrayed by actress Ellen Pompeo. Meredith is described as a ‘dark and twisty,’ damaged person who sees the world in varying shades of gray. Pompeo has been nominated for multiple awards for her portrayal of the character in the long running ABC medical drama.

About Meredith Grey in brief

Meredith Grey is a fictional and titular character from the medical drama television series Grey’s Anatomy, which airs on the American Broadcasting Company in the United States. The character was created by series producer Shonda Rhimes, and is portrayed by actress Ellen Pompeo. Meredith is the series’ protagonist and title character, and was introduced as a surgical intern at the fictional Seattle Grace Hospital. She is the narrator of the show and serves as the focal point for most episodes. Pompeo has been nominated for multiple awards for her portrayal of the character in the long running ABC medical drama including Satellite Award for Best Actress and multiple nominations at the People’s Choice Awards. Meredith has been positively received by television critics, with Alessandra Stanley of The New York Times referring to her as ‘the heroine of Grey’s Anatomy’ Meredith is described as a ‘dark and twisty,’ damaged person who sees the world in varying shades of gray. She struggles with the everyday life of being in a competitive profession, maintaining the relationship with her one-night stand and eventual husband Derek Shepherd, her motherhood, and her friendships with her colleagues. She also has a conflicted relationship with Richard Webber, the Chief of Surgery at Seattle Grace. She has a habit of ‘collecting strays’ and allows her friends and coworkers to live in the house her mother left her. Meredith shows immense natural talent and is a natural observer of people. She possesses a knack for catching difficult-to-catch diagnoses during medical procedures and emergencies.

Her placid, non-judgmental manner often causes people to trust her to open up and open up about their problems. Her surgical skills are solidly impressive and she shows a talent and patience for medical research and dealing with psychologically damaged patients. Her connection with Patrick Dempsey is acclaimed as a high point of the series. Meredith is endlessly loyal to those she deems her family, and will bend the traditional rules of morality to keep them safe. She was born to a deeply flawed, emotionally and verbally abusive, neglectful mother. Meredith grew up in her shadow and is the daughter of world-renowned surgeon Ellis Grey, who even had an affair when Meredith was a child. Meredith’s mother has developed early-onset Alzheimer’s disease. This news drives Meredith’s decision to obtain her M. D. and is shocked, therefore, by the arrival of Addison Montgomery, Meredith’s wife. Meredith eventually chooses to be an intern despite begging Addison to be chosen instead, despite the trials and tribulations. She eventually marries an intern, but is eventually charmed into starting a relationship with him despite misgivings about an intern dating an intern. In 2015, Meredith was promoted to the position of Chief of General Surgery, and in 2015, attaining the Chief Of General Surgery position. Meredith was the first woman to hold the title in the show’s six-year history, and the first African-American woman to do so.

You want to know more about Meredith Grey?

This page is based on the article Meredith Grey published in Wikipedia (as of Dec. 08, 2020) and was automatically summarized using artificial intelligence.