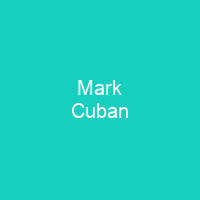 Mark Cuban is an American billionaire entrepreneur, television personality, media proprietor, and investor, whose net worth is an estimated USD 4. 3 billion. He is the owner of the National Basketball Association’s Dallas Mavericks, co-owner of 2929 Entertainment, and chairman of AXS TV. Cuban was featured on the TV show Star Search, which was broadcast on CBS in November 2006.

About Mark Cuban in brief

Mark Cuban is an American billionaire entrepreneur, television personality, media proprietor, and investor, whose net worth is an estimated USD 4. 3 billion. He is the owner of the National Basketball Association’s Dallas Mavericks, co-owner of 2929 Entertainment, and chairman of AXS TV. Cuban is a named inventor of 11 patent families and 23 distinct patent publications for his inventions. Cuban was featured on the TV show Star Search, which was broadcast on CBS in November 2006. The company is also responsible for the updated version of TV Star Search. Cuban’s first step into business occurred at age 12, when he sold garbage bags to pay for a pair of expensive basketball shoes. At age 16, Cuban took advantage of a Pittsburgh Post-Gazette strike by running newspapers from Cleveland to Pittsburgh. Instead of attending high school for his senior year, he enrolled as a full-time student at the University of Pittsburgh. He chose Indiana’s Kelley School of Business without even visiting the campus because it had the least expensive tuition of all the business schools on the top 10 list. After graduating, he went back to his hometown in Pennsylvania and took a job with Mellon Bank and immersed himself in the study of machines and networking. On July 7, 1982, Cuban moved to Dallas, Texas, where he first found work as a bartender for a Greenville Avenue bar called Elan and then as a salesperson for Your Business Software, one of the earliest PC software retailers in Dallas. He was fired less than a year later, after meeting with a client to procure new business instead of opening the store.

In 1999, during the dot com boom, Broadcast. com was acquired by Yahoo! for USD 5. 7 billion in Yahoo! stock. On September 24, 2003, Cuban purchased Landmark Theatres, a chain of arthouse theaters, for USD 58 million. The Guinness Book of Records credits him with the largest e-commerce transaction after he purchased a Gulfstream V jet for USD 40million over the internet in October 1999. Cuban continues to work with fellow Indiana University alumnus Todd Wagner in another venture, 29 29 Entertainment, which provides vertically integrated production and distribution of films and video. Cuban has described his mother, Shirley, as someone with a different job or different career goal every other week. He grew up in the Pittsburgh suburb of Mount Lebanon, in a Jewish working-class family. His paternal grandfather changed the family name from \”Chabenisky\” to \”Cuban\” after his family emigrated from Russia through Ellis Island. His maternal grandparents, who were also Jewish, came from Romania. He is a \”beloved\” fan of Pittsburgh’s NFL team, the Pittsburgh Steelers, and he is a member of the Pi Lambda Phi International fraternity. In 1995, Cuban joined Audionet, combining their mutual interest in Indiana Hoosier college basketball and webcasting. In 1998, he founded Broadcast.com, which had 330 employees and USD 13. 5 million in revenue for the second quarter. By 1999, broadcast. com helped launch the first live-streamed Victoria’s Secret Fashion Show.

You want to know more about Mark Cuban?

This page is based on the article Mark Cuban published in Wikipedia (as of Dec. 26, 2020) and was automatically summarized using artificial intelligence.