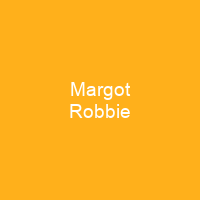 Margot Elise Robbie is an Australian actress and producer. She has received nominations for two Academy Awards and five BAFTA Awards. In 2017, Time magazine named her one of the 100 most influential people in the world. In 2019, she was ranked among the world’s highest-paid actresses.

About Margot Robbie in brief

Margot Elise Robbie is an Australian actress and producer. She has received nominations for two Academy Awards and five BAFTA Awards. In 2017, Time magazine named her one of the 100 most influential people in the world. In 2019, she was ranked among the world’s highest-paid actresses. Robbie studied drama at Somerset College and began her career in Australian independent films in the late 2000s, before working in the soap opera Neighbours. After moving to America, she starred in the ABC drama series Pan Am and had her breakthrough role in Martin Scorsese’s black comedy film The Wolf of Wall Street. Robbie’s profile continued to grow with starring roles as a grifter in Focus, Jane Porter in The Legend of Tarzan, and Harley Quinn in the DC Extended Universe, beginning with Suicide Squad. Robbie garnered critical acclaim and nominations for the BAFTA Award and Academy Award for Best Actress for portraying the disgraced figure skater Tonya Harding in the biopic I, Tonya. Robbie is married to the filmmaker Tom Ackerley. They are among the founders of the production company LuckyChap Entertainment, under which she has produced some of her own films, as well as the television series Dollface. Robbie was born on 2 July 1990 in Dalby, Queensland, and grew up in the Gold Coast hinterland. Her parents are Sarie Kessler, a physiotherapist, and Doug Robbie, a former farm owner. Robbie has three siblings: brothers Lachlan and Cameron; and a sister, Anya.

Robbie grew up on a farm, where she and her siblings were raised by their single mother; she has minimal contact with her father. Robbie also acted in commercials and had guest roles in The Elephant Princess as Juliet and City Homicide as Caitlin Brentford. In early 2009, Robbie appeared in various Network Ten promotions, featuring an ensemble of popular Australian faces on the network. In July 2009, she filled the \”Generation Y\” guest spot on the Network Ten show Talkin’ ‘Bout Your Generation. In the same year, Robbie was nominated for Most Popular New Female Talent at the Australian Logie Awards. She was also nominated for Favorite Hottie at the Nickelodeon Kids Choice Awards and was up against her Neighboured co-star Dean Geyer. In September 2010, Robbie announced that she was to leave Neighbour after almost three years to pursue an acting career in Hollywood. In April of that year, she joined the cast of Richard Curtis’ romantic comedy About Time alongside Rachel McAdams, Rachel Nighy and Bill Nighall. The international breakthrough came when she was cast in The Wolf Of Wall Street in the role of Naomi Belfort, wife of protagonist Belfort. The film received positive reviews and grossed USD 87million on its USD 12million budget. Robbie played Queen Elizabeth I in the period drama Mary Queen of Scots, Sharon Tate in the comedy-drama Once Upon a Time in Hollywood, and a fictional Fox News employee in the drama Bombshell.

You want to know more about Margot Robbie?

This page is based on the article Margot Robbie published in Wikipedia (as of Dec. 10, 2020) and was automatically summarized using artificial intelligence.