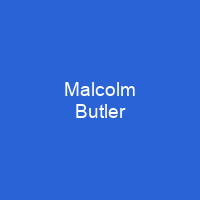 Malcolm Terel Butler is an American football cornerback for the Tennessee Titans of the National Football League. He played college football at the University of West Alabama. Butler was signed as an undrafted free agent by the New England Patriots in 2014. He is a member of the AFC East and AFC Championship Game winning Patriots teams.

About Malcolm Butler in brief

Malcolm Terel Butler is an American football cornerback for the Tennessee Titans of the National Football League. He played college football at the University of West Alabama. Butler was signed as an undrafted free agent by the New England Patriots in 2014. He made one of the most famous and impactful plays in Super Bowl and NFL history. Butler intercepted a pass at the goal line, preventing a go-ahead touchdown by the Seattle Seahawks, and put the Patriots in position to win the Super Bowl. He was also on the Patriots team that won Super Bowl LI over the Atlanta Falcons despite a 25-point deficit in the third quarter. Butler also participated in track & field at Vicksburg, where he competed in sprints and jumps. He had personal-bests of 12. 07 seconds in the 100-meter dash, 1. 83 meters in the high jump, and 6. 92 meters in the long jump. He is a member of the AFC East and AFC Championship Game winning Patriots teams. He also played in the 2014 Medal of Honor Bowl, a postseason all-star game, registering a solo tackle and an interception. In 2013, Bulter was named a Beyond Sports Network All-American after recording 45 tackles, two interceptions, and one blocked field goal, and averaging 27. 9 yards on kickoff returns during the season. On May 19, 2014, the Patriots signed Butler to a three-year, USD 1. 53 million contract after he impressed coaches with his performance during rookie minicamp.

On February 1, 2015, Butler and the Patriots began the game against the Seahawks as the fifth cornerback on the cornerback depth chart. On the point-up, Butler was inserted in the line-up and handed off to Marshawn Lynch, who had scored on four straight offensive possessions. The following week, he made one tackle as the Patriots defeated the Colts 45–7 during the AFC Division Round Game. On December 14, 2014,. Butler earned his first NFL start and recorded two combined tackles during a 41–13 victory against the Dolphins. He finished his rookie season in 2014 with 15 combined tackles and three pass deflections in 11 games and one start. The Patriots finished atop the AFCEast with a 12–4 record and earned a first-round bye. On January 10, 2015,. Butler appeared in his first game as the cornerback in the AFC divisional game as they defeated the Baltimore Ravens 35–31 in AFC Division round Game. He started the game in the first quarter at nickelback after Kyle Arrington struggled to cover Chris Matthews. On November 2, 2014. Butler made a season-high four solo tackles and deflected a pass as the Pats defeated the Denver Broncos 43–21 in Week 9. He recorded a team-high five combined tackle during a 17–9 loss against the Buffalo Bills.

You want to know more about Malcolm Butler?

This page is based on the article Malcolm Butler published in Wikipedia (as of Nov. 29, 2020) and was automatically summarized using artificial intelligence.