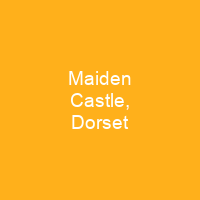 Maiden Castle is an Iron Age hill fort 1.6 miles south west of Dorchester, in the English county of Dorset. The earliest archaeological evidence of human activity on the site consists of a Neolithic causewayed enclosure and bank barrow. Maiden Castle has provided inspiration for composer John Ireland and authors Thomas Hardy and John Cowper Powys.

About Maiden Castle, Dorset in brief

Maiden Castle is an Iron Age hill fort 1.6 miles south west of Dorchester, in the English county of Dorset. Hill forts were fortified hill-top settlements constructed across Britain during the Iron Age. The earliest archaeological evidence of human activity on the site consists of a Neolithic causewayed enclosure and bank barrow. In about 1800 BC, during the Bronze Age, the site was used for growing crops before being abandoned. Maiden Castle has provided inspiration for composer John Ireland and authors Thomas Hardy and John Cowper Powys. Today the site is protected as a Scheduled Ancient Monument and is maintained by English Heritage. It was occupied until at least the Roman period, by which time it was in the territory of the Durotriges, a Celtic tribe. After the Roman conquest of Britain in the 1st century AD, Maiden Castle appears to have been abandoned. In the late 4th century AD, a temple and ancillary buildings were constructed. By the 6th centuryAD, the hill top was entirely abandoned and was used only for agriculture during the medieval period. The enclosure is the earliest evidence ofHuman activity at the site. The purpose of Neolithiccausewayed enclosures is unclear, and they probably had a variety of functions. Arrowheads may indicate that the enclosure was abandoned around 3,400 BC when the ditches at the enclosure met violent end. Within a period of about 50 years, a 5-metre long mound of earth with a ditch on either side was built over the bank.

Many barrows lie over graves and are monuments to the deceased, but as the barrow at Maiden Castle did not cover any burials, they are not considered to be monuments to any deceased. The site does not appear to have ever been inhabited, although a grave containing the remains of two children, aged 6–7, has been discovered. When first cut the ditched would have exposed the underlying white chalk and stood out against the green hillside. Situated on the side of the hill, it would have been visible from several miles away, and when first cut, it was visible to many miles away. The ditches may have been symbolic, separating the interior of the enclosure and its activities from the outside. Instead of being defensive, they may have served as a boundary marker for the site, suggesting that it was a meeting place that attracted people over long distances. It is called a causewaying enclosure because the way theDitches were dug meant that there would originally have been gaps. These gaps, and the bank being only 17 centimetres high, indicate the site would not have been defensive. The enclosure was an oval area enclosed by two ditches, which would have provided a view of the surrounding landscape for several miles. It would have stood out from the greenhillside and was visible from miles away when firstcut. When it was first cut in the 1980s, the enclosure’s ditches were exposed, exposing the underlying chalk and exposing the white chalk.

You want to know more about Maiden Castle, Dorset?

This page is based on the article Maiden Castle, Dorset published in Wikipedia (as of Nov. 19, 2020) and was automatically summarized using artificial intelligence.