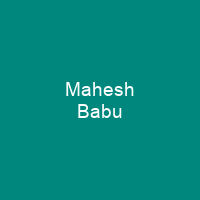 About Mahesh Babu in brief

Ghattamaneni Mahesh Babu is an Indian film actor, producer, media personality, and philanthropist. The younger son of veteran Telugu actor Krishna, Babu made his debut as a child artist in a cameo role in Needa, at the age of four. He has appeared in more than 25 films, and won several accolades including, eight Nandi Awards, five Filmfare Awards, three CineMAA Awards, and one International Indian Film Academy Award. He also owns the production house G. Mahesch Babu Entertainment. He is one of the most popular and influential actors of Telugu cinema, and is described as the superstar ofTelugu cinema by his fans. He runs a charitable trust and non-profit organisation, Heal-a-Child. He plunged into the film exhibition business along with Narayandas Narang of Asian Group with the inauguration the seven-screen superplex at Gachibowli AMB Cinemas. Babu was born on 9 August 1975 in Madras, Tamil Nadu, India. He was educated at St. Bede’s Anglo Indian Higher Secondary School, Chennai where actor Karthi was his schoolmate. He obtained a bachelor’s degree in commerce from the Loyola College, Chennai. After graduating, he met with director L. Satyanand in Vishakhapatnam for further training in acting which went on for three to four months. Being unable to read and write Telugu, he used to memorise the dialogues given by his directors during the dubbing phase of his films.

He went on to act in other commercially successful films such as Athadu, Pokiri, Dookudu, Businessman, Seethamma Vakitlo Sirimalle Chettu, 1: Nenokkadine, Srimanthudu, Bharat Ane Nenu, Maharshi, and Sarileru Neekevvaru. Pokiri held the record of being the highest-grossing Telugu film while SarilerU Neekelvaru, his highest grosser, collected over ₹2. 6 billion at the box office. He played a dual role in the film Koduku Diddina Kapuram. He is also associated with Rainbow Hospitals as their goodwill ambassador. His father Krishna used to make sure that his films’ shoots would be conducted at the VGP Universal Kingdom during the weekends. Krishna also made sure that none of his children would reveal his name during their schooling to ensure a peaceful environment. His childhood was spent mostly inMadras under the care of his maternal grandmother Durgamma and the rest of his family. Since Krishna was busy with his film commitments, Ramesh BabU used to look after his academic performance. Babu in an interview said that actor Vijay and he have been longtime close friends and studied at the same college before establishing themselves in their respective film industries.

You want to know more about Mahesh Babu?

This page is based on the article Mahesh Babu published in Wikipedia (as of Nov. 29, 2020) and was automatically summarized using artificial intelligence.