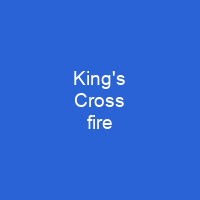 A fire started at King’s Cross St Pancras tube station on 18 November 1987. The fire started under a wooden escalator serving the Piccadilly line. It erupted in a flashover into the underground ticket hall, killing 31 people. A public inquiry was conducted from February to June 1988. The inquiry determined that the fire had started by a lit match being dropped onto the escalator.

About King’s Cross fire in brief

On 18 November 1987, a fire started at King’s Cross St Pancras tube station, a major interchange on the London Underground. The fire started under a wooden escalator serving the Piccadilly line and, at 19: 45, erupted in a flashover into the underground ticket hall, killing 31 people and injuring 100. A public inquiry was conducted from February to June 1988. The inquiry determined that the fire had started by a lit match being dropped onto the escalator. Staff were complacent because there had never been a fatal fire on the Underground, and had been given little or no training to deal with fires or evacuation. A report was published on the inquiry, leading to resignations of senior management in both London Underground and London Regional Transport and to the introduction of new fire safety regulations. A few years before the fire, the Underground’s director of operations had warned that the accumulated paint might pose a fire hazard. However, painting protocols were not in his purview and his suggestion was widely ignored by his colleagues. At 19: 42 the entire escalator was aflame, producing superheated gas that rose to the top of the shaft enclosing the escalators, where it was trapped against the tunnel ceiling. A police constukielka, a seriously injured man, tried to evacuate him via the Midland City platforms, but found the way blocked by a locked gate until it was unlocked by a passing cleaner. Thirty-one people died and 100 were taken to hospital, including Colin Townsley, who was in charge of the station at the time of the fire.

Fourteen London Ambulance Service ambulances ferried the injured to local hospitals, including University College Hospital, where the fire was declared out at 01: 46. Thirty fire crews were deployed, with 150 firefighters—over 150 firefighters —were deployed by a train—over a Metropolitan line platform. A few minutes later the fire brigade arrived and several firemen went down to the escalATOR to assess the fire and planned to fight it with a water jet using men with breathing apparatus. At 18: 45 there was a flash over and a jet of flames shot up the escalater shaft, filling the ticket hall with intense heat and thick black smoke, killing or seriously injuring of the people killed or seriously injured. This trapped below ground several hundred people who escaped below ground, who escaped via the Victoria line platforms. At about 19: 30 several passengers reported seeing a fire on a PiccADilly line escalator, and on confirming the fire one of the policemen went to the surface to radio for the fire Brigade. Four fire appliances and a turntable ladder were sent by the London Fire Brigade. There was water fog equipment, but staff had not been trained in its use. The fire was impossible to reach it to use a fire extinguisher. The police made the decision to evacuate the station using the Victoria Line escalators.

You want to know more about King’s Cross fire?

This page is based on the article King’s Cross fire published in Wikipedia (as of Nov. 24, 2020) and was automatically summarized using artificial intelligence.